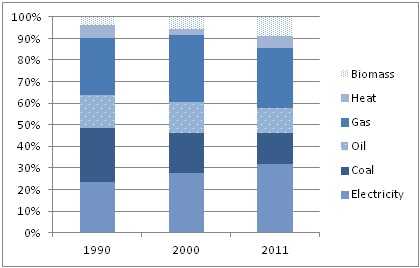 The electrification rate increased in all main branches except paper. The largest progression took place in transport equipment (+14 points), food (+11 points), machinery (+9 points) and the steel industry (+8 points). Non-ferrous is historically the industrial branch with the highest electricity penetration.

Electrification rate by industrial branch in the European Union 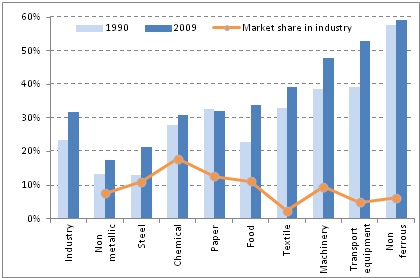 The change in the industry structure (i.e. an eventual shift to more electricity intensive industries) does not explain the electricity penetration. Calculating the industrial energy consumption in 2010 by assuming the same share of industrial branches as in 1990 does not impact the breakdown by energy in 2010. The diffusion is found to be mainly caused by two factors. Firstly, the development of electric uses in the industry, such as motive power linked to an increase mechanisation, and secondly, fuel substitutions in production processes (electric steel process, electric furnaces for glass making, etc).