Turkey expected the natural gas demand to rise to 85 bcm in 2015, and planned to greatly develop the electricity production capacity from gas. To supply that demand, the country signed many gas supply contracts. However, the 2001 economic crisis and the postponement of the price deregulation led to a much lower demand, and the country found itself in a situation of surplus supply (the signed contracts were ¼ higher than the country's demand). However, Turkey took advantage of that situation and of its geographical position as a strategic player for the supply of gas to Europe, and in recent years its domestic consumption has increased sufficiently for it to seek new supply contracts.

There are three contracts signed with Russia. Under a first contract, 6 bcm/year was to be supplied between 1987 and the end of 2012, although in mid-2011 Botas gave Gazprom notice that it was ending the contract due to pricing disagreements. Under a second contract, signed in 1999, 8 bcm/year will be supplied until 2021. A third contract, signed with the Blue Stream gas pipeline, provides for the supply of 16 bcm/year between 2009 and 2028 (initial supply of 2 bcm/year in 2003, gradually increased to the plateau volume).

Algeria supplies Turkey under a long-term contract of 4 bcm/year over a 20-year period that will be extended of 10 years to 2024; a first contract signed in 1988 for the supply of 2 bcm/year from 1994 was extended in 1995 for the delivery of an additional 2 bcm/year.

Iran supplies Turkey within a contract for total amount of 228 bcm over 23 years starting in January 2003, following the commissioning of the 325 km-long gas pipeline connecting Iran to Ankara. 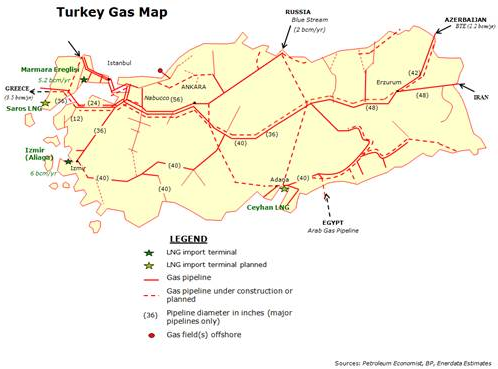 Since the completion of a gas pipeline connecting Azerbaijan (field of Shah Deniz) to Turkey via Georgia (Baku-Tbilissi-Erzurum) in April 2007, Azerbaijan has grown into a significant exporter to Turkey. The pipe's initial capacity was 2.2 bcm/year, and has reach 6 bcm/year up to now.

The gas pipeline connecting Greece to Turkey, which is part of the ITGI project, was commissioned in December 2007. The strategic purpose of this 296 km-long pipeline is to diversify the EU's supply sources by transporting gas from Caucasus countries to Europe. It has a capacity of 11.5 bcm/year. This gas pipeline cost Turkey approximately €250m and Greece between €30m and €40m. There are plans for an extension of this pipeline from Greece to Italy (IGI project). That subsea line, which will be 800 km long, will supply 8 bcm/year to Italy in 2015; this section is being developed by Depa and Edison.