This analysis relies on the ODYSSEE database and analysis as well as on a report prepared by Enerdata for ADEME “Quantitative evaluation of explanatory factors of the lower energy efficiency performance of France for space heating compared to European benchmarks”, ADEME, 2011

Space heating represents a significant share of energy consumption. On average in Europe, its consumption corresponds to 70% of the total consumption of households. Various indicators can be used to identify the country with the best performance so that it can be used as a benchmark for other countries. The most common indicator used to benchmark performance for household space heating for EU countries is the energy consumption per m2 (to correct for differences in dwelling size) and degree-day (to correct for differences in climate), measured in useful energy (to correct differences in the energy mix, thus in end-use efficiencies). Heating demand per m2, even corrected for differences in climate and fuel mix, varies significantly among EU countries. Apart from Bulgaria and Spain which have the lowest rate of penetration of central heating (55-60%) and thus a lower level of comfort, almost all countries have more than 85% of central heating and can be compared: The Netherlands and Nordic countries, such as Finland, Sweden or Denmark, are among the best performers, while France represents the worst performer (about 50% above the lowest values). Does it mean that dwellings in the Netherlands are the most efficient, and if so, why? Factors other than efficiency of dwellings can help explain some of the differences observed. 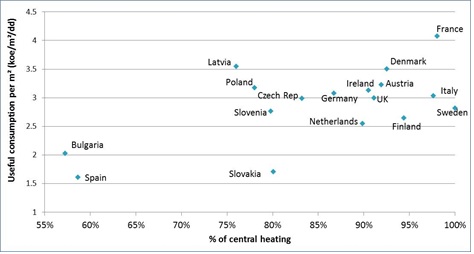 Different composition of the housing stock1

In the majority of EU countries under review, the share of collective dwellings is between 40% and 50% with Sweden being the exception where it exceeds 60%. In contrast, in the UK and the Netherlands the stock of dwellings is composed predominantly of individual dwellings (81% and 70% respectively). Individual dwellings consume on average 10 to 30% more than collective dwellings, as they have greater heat losses (due to different areas in contact with the outdoor)2. The stock of individual dwellings may in addition differ significantly, according to the share of row house or detached houses: a semi-detached house consumes on average 15% less per m² than an isolated dwelling3. In The Netherlands and UK, the stock of individual dwellings is composed by at least 70% of semi-detached houses, against around 30% in France, Germany and Finland or even less in Denmark, Austria and Sweden. The fact that non-isolated houses are dominant in the Netherlands may explain its higher energy performance, but this is partly offset by the fact that this country has a higher share of individual houses: in summary, the structure of the dwelling stock does not explain the good performance of the Netherlands. Other factors such as the height or ownership structure of collective dwellings does, not explain the different performances among European countries.

The average age of buildings and the rate of new construction could also explained the differences observed: the higher the share of recent dwellings is, i.e. built with more efficient standards, the higher the energy performance should be. The Netherlands has a higher proportion of recent dwellings than the other countries4 : their better performance is partly explained by the rapid turnover of their dwelling stock. 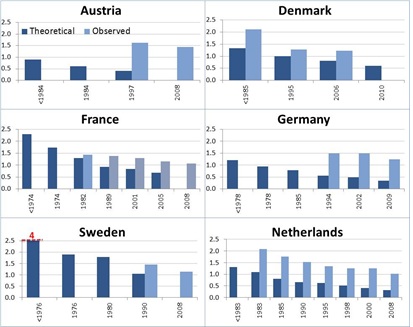 ... and to existing dwellings’ retrofitting

Space heating energy performance is also highly dependent on the level of thermal retrofitting of the existing dwelling stock. In the Netherlands, efforts to improve energy efficiency of existing dwellings occurred during the 80’s thanks to a national program for existing dwelling insulation that covered 2.5 million dwellings from 1978 to 1987.

Differences in indoor temperature among countries may also explain part of the differences observed. However; information on heating behaviour is not well known. UK is the only country publishing regular data: the indoor temperature has been increasing with the penetration of central heating from 16 °C in the early 90’s to 19 °C now on average5. Without data on indoor temperature, the potential role of behaviours can be assessed through the share of energy expenditures in the household budget. France is among the countries where this share is the lowest: around 15% of the total budget. In Denmark and the Netherlands, households spend more than 20% of their expenditures, which indicates stronger forces that can induce different behaviours and thoughts as to their indoor temperature and their energy savings investments. This thought pattern could be a contributing factor to their good performances. In new and more insulated dwellings, households have the possibility to increase their indoor temperature at constant budget (rebound effect). There are only a few studies on this issue and on the real performances of new dwellings. However it does seem that their actual performance is often below what is required by the regulations, because of higher heating temperature and also because of the quality of construction may not conform to the standards.

The Netherlands is the benchmark country for space heating in Europe. It can be explained by several factors: (i) a rapid turnover of the dwelling stock; (ii) a higher updating rate in thermal regulations; (iii) implementation of programmes to speed up the retrofitting of existing dwelling; (iv) and high energy prices.