The year 2011 was a record year for the solar photovoltaic industry, with more than 29 GW new capacity installed worldwide, corresponding to a 70% increase compared to 2010. Global PV capacity exceeded 69 GW in 2011, with 70% installed in European countries.

In 2011, nearly one-third of the new PV capacities were installed in Italy (9.3 GW) and more than one-fourth in Germany (7.5 GW), in a rush to benefit from advantageous feed-in-tariffs that were to be lowered during the year.

The United States accounted for 6% of capacity additions (nearly 1.9 GW) and 6% of installed capacity (4.5 GW). Utilities and non-residential PV installations are growing steadily and in 2011 they accounted for more than half of the new PV capacity installed. Capacity additions remain concentrated in California (29% in 2011), New Jersey (17%) and in five other States (Arizona, New Mexico, Colorado, Pennsylvania and New York, 34%). The country aims to raise new capacity installed every year to 2.8 GW in 2012, to more than 5 GW in 2014 and to 8 GW in 2016, reaching 15% of the global PV new installations.

In Japan over 1.4 GW were installed in 2011 which corresponds to a 45% growth. Nearly 90% of new installations were in the residential sector, highlighting a Japanese specificity (start of the Residential PV System Dissemination Program in 1994).

The 2011 boom is continuing the strong development which occurred over the last ten years. This expansion has two main drivers, namely falling PV module prices and strong support policies.

PV modules prices have fallen dramatically since 1995. This drop is the result of two main factors: the learning factor, which tends to reduce the average cost by about 20% for each doubling of cumulative installed capacity and the emergence of new low-cost Chinese manufacturers that have dragged prices downwards. 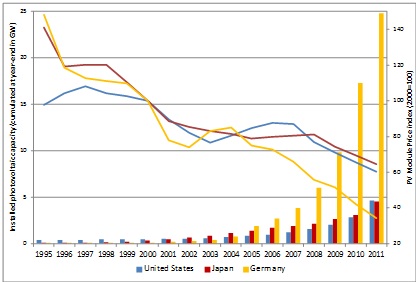