The Japanese are large electricity consumers; their consumption per capita reached 7,700 kWh in 2010, i.e. the same level as the OECD average but 30 % higher than the EU average. The share of electricity represented about 25% of total energy consumption in 2010, compared to 21% for the OECD average and 20% in Europe. Nuclear power contributes to more than ¼ of the electricity production, the same contribution as coal and gas.

The power generation from nuclear has considerably reduced since Fukushima, with only 11% of reactors in operation in December 2011…

The country’s nuclear production was greatly disturbed following the 8.9-magnitude earthquake that struck Japan in March 2011. Eleven reactors at four nuclear power plants in the region were operating at the time and all shut down automatically when the quake hit. The operating units that shut down were Tepco''s Fukushima Daiichi 1, 2, 3, Fukushima Daini 1, 2, 3, 4, Tohoku''s Onagawa 1, 2, 3, and Japco''s Tokai (total 9,377 MWe net). Fukushima Daiichi units 4-6 were not operating at the time, but were impacted (total 2,587 MWe net) . Eight other reactors were closed in April/May2011. After that date all nuclear power plant units closed for routine maintenance were not allowed to restart. As a result, the number of operating nuclear units has dropped rapidly: only 6 units were in operation at the end of 2011, and 3 in February 2012 out of a total of 54 units. 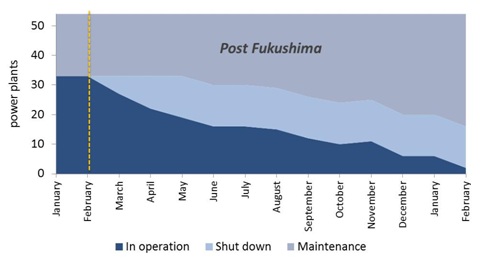