Implementation of biofuels polices is complex due to diversity of interests and concerns. Countries around the world are utilising different approaches to policy design, but with common goals of supporting biofuels development and economic growth, protecting the environment, and increasing energy security. This blog examines several approaches to policy design and the current state of biofuels production. Biofuels are manufactured from biomass; wastes and residues of biological origin and energy crops. First generation biofuels are made from sugar, starch, and vegetable oil. Advanced biofuels are produced from a broader range of feedstock, including wood, straw, and algae. Advanced biofuels are still under development and require further research to be carried out. However, significant progress has been made and several countries are scaling up production of advanced biofuels. The transport sector remains the primary consumer of biofuels. In 2011, biofuels represented 3.7% of the total fuel used in road transport. This volume of fuel is produced with a surface of land close to 18 million hectares, which is around 1.5% of total cultivated land on earth. Biofuels can have several advantages. Cultivated lands are much better distributed around the world than oil reserves. Therefore, biofuels can help countries increase their energy security. Biofuels may also have a positive impact on carbon dioxide (CO2) abatement. Advanced biofuels have particularly significant benefits in reducing carbon dioxide emissions.

Repartition of oil reserves and cultivated land in the world

2011 was a record year for biofuel production with more than 60 million tonnes of oil equivalent (Mtoe) produced worldwide. This is 6 times more than in 2000. 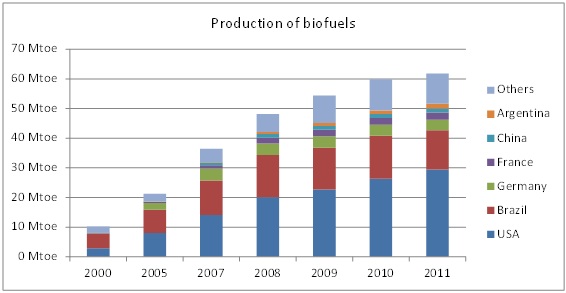 While biofuels production increased rapidly beginning in 2000, it has tapered off in recent years. Some countries, like Germany, have seen decreased biofuels production since 2007. Germany has reconsidered its support to this industry, postponing the blending targets. The percentage of transport fuel that comes from biofuels is illustrated in the Figure 3. Apart from Brazil, this indicator tells us about public policies in favour of biofuels worldwide. Countries with high share have generous support policies (France, Germany, USA…). Brazil’s situation is atypical and can be explained by its specific climatic conditions and by the size of the country. Today, Brazilian biofuels are economically competitive (or almost) with fossil fuel. Of course, Brazilian production remains limited in volume and this country appears to be close to its limit as production has not increased during the last 4 years.

Share of biofuels used in road transport in key countries 2011 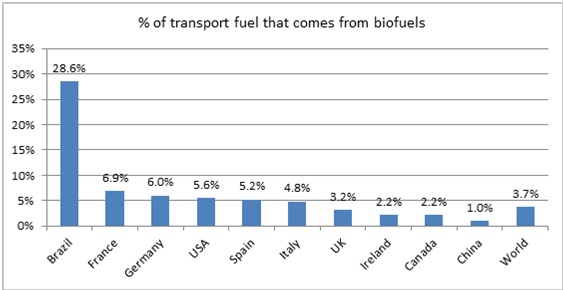 Blending targets, the core of the policy implemented worldwide

Because biofuels are still not intrinsically profitable in most countries, public support has been the driving force for their development. The key instrument has been the blending targets mechanism. A blend refers to the percentage of biofuels that a transportation fuel is required to have when it is sold to consumers. Blending targets (sometimes called “blending mandates”) have been adopted in more than 50 countries worldwide. In some countries, this amount is expressed in volume and not in percentage, but it remains the same mechanism. The cost of biofuels is mainly borne by consumers and reflected in the price at the pump. Economics is a key driving force of biofuels development. For example, in most European countries, fuel prices at the pump are double that in the United States because of a higher fuel tax. When the price of gasoline is high, there is a need to develop a more affordable fuel alternative. These cost conditions favour the emergence of biofuels as the logical alternative. European Union In April 2009, the European Union adopted a directive on the promotion of the use of biofuels or other renewable fuels for transport. Its provisions require member states to introduce legislation and take the necessary measures to ensure that biofuels account for a minimum proportion of the fuel sold on their territory. The European Commission sets a 10% share of transport fuel from renewables by 2020, almost all of which is expected to be met by blending biofuels with conventional fuels. There are discussions on how the 10% target will be achieved. Many experts believe that in the short term biofuels will remain the main source of low CO2 emissions technologies in transportation, but in the longer term electro mobility could become the main stream component in this strategy. The 10% target for renewable energy in transport is in fact a 10% mandate to be achieved by each Member State. Discussions are ongoing in Europe to determine if it is desirable or not to go beyond this 10% target after 2020. USA In May 2009, the U.S. Environmental Protection Agency (EPA) released revisions to the nation’s Renewable Fuel Standard program (RFS). The new requirements establish specific volume standards for renewable fuel. The required volume has been increased, eventually reaching 36 billion US gallons by 2022, against 5.4 billion in 2008. Beside the RFS, the federal government established the Biomass Crop Assistance Program (BCAP). The BCAP was created to support the establishment and production of eligible crops for conversion to bioenergy as well as to assist agricultural and forest land owners and operators with collection, harvest, storage, and transportation of eligible material for use in a biomass conversion facility. Brazil In 1980 an agreement was reached between Petrobras and the automotive industry to increase the Brazilian gasoline octane number by adding up to 20% volume of bioethanol to gasoline and starting a lead phase down in the country. In 1993 a law was issued mandating that all gasoline sold in Brazil must contain 22% volume of bioethanol. The law issued in 1993 was modified, and today, the bioethanol content in gasoline is fixed but it can rise from 20% to 25% in volume. In fact the bioethanol content in gasoline is defined every year by an Agricultural Ministry decree and is dependent on bioethanol production/availability. Bioethanol must be between 20-25% in volume. India India approved a new biofuel policy in 2008 which aims to increase the blending of biofuels with petrol and diesel to 20% by 2017. Domestic oil retailers are required to mix ethanol with petrol and biodiesel made from jatropha with diesel. However, in spite of the efforts made by the state, the production of biofuels has yet not increased. Doubt arises as to whether the country will be able to meet its target. It is felt that the government policy, in particular regarding land utilization, the organised cultivation of jatropha, and the pricing of jatropha seeds, needs to be clearer. Critics say that the target is improbable due to the unavailability of high yielding drought tolerant jatropha seeds and a lack of sufficient jatropha seeds to produce bio-diesel. China Overall, the country seeks to implement a 10% biofuels mandate by 2020. To date, nine Chinese provinces are requiring 10% ethanol blends, including Heilongjian, Jilin, Liaoning, Anhui, and Henan. Japan In 2009, the Ministry of Environment announced that Japan has commenced a three year study on the impact of increasing the country''s biofuels mandate from 3% to 10% by 2018. Currently, Japan has a blending target up to 3% biofuel but in fact the share of biofuels is lower than that.

New generation biofuels (ligno-cellulosic, algae) are disadvantaged by extra production costs, even if they might be promising in the long term. In 2009, global expenditure on biofuel R&D increased to US$ 800 million. Some of this money goes to demonstration plants which are more capital intensive than research conducted in laboratories. Today, these research projects are largely supported by Governments. Owing to research efforts, some experts believe the cost difference between Brazilian biofuels and European biofuels may decrease in the coming years. Two factors would explain this decrease. First the economic development of Brazil has increased wages. Second, the yield of European beet crops is improving due to research programs. Philippe Duval, President of Tereos, a producer of bioethanol in Europe, said, "It is not unthinkable that, by 2020, the competitiveness of beet in European countries will catch up with that of the sugar cane in Brazil." Some countries have also implemented mechanisms where new generation biofuels need to be incorporated in the current blending proposed to consumers. For instance, the United States established a specific quota for ligno-cellulosic biofuels. The EU Renewable Energy directives used a similar approach by double counting the contribution of ligno-cellulosic and biofuels made from algae, toward the 2020 target.

Investments required for biofuels production are significant. The basic unit for the investment is around $1,500/tonne of oil equivalent of annual capacity. Replacing 10% of fossil energy for transport (i.e. approximately 50 Mtoe for the United States) corresponds to a minimum investment of US$ 75 billion. As such, stable supportive legislation is the critical element for long-term success of the biofuels industry. Notes: 1 This percentage breakdown is on an energy basis (Mtoe).