Analysis based on our new Myanmar country report published in March 2014. Myanmar used to be one of the most isolated countries in the world. Once, one of the richest countries in Asia, in 2013 Myanmar was among the poorest countries, ranked 157th by International Monetary Fund (IMF). However, since the military dictatorship ended in 2011, the Republic of Union of Myanmar appears more and more as the next El Dorado for foreign investors. Myanmar annual economic growth has been around 6%/year over the last 5 years and is expected to stay at these levels for the next few years.

What are the reasons?

Myanmar is not one of the most populated countries in South East Asia. The population growth rate (0.77% in 2013) is actually not so far from a developed country rate (i.e., South Korea 0.59%). At this rate, Myanmar population should reach 60 million inhabitants by 2030 far from the regional heavy weight – Indonesia with 280 million and Philippines with 141 million (source IFS).

Burmese are among the poorest citizens in Asia and experiencing a strong GDP growth. Between 2009 and 2013, the GDP per inhabitant increased by 150%. 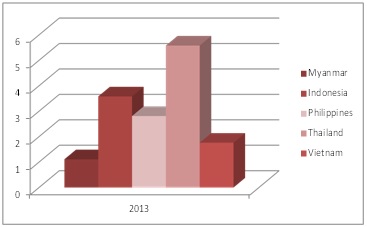 Myanmar is strategically located between two major players in Asia – China and India – and to the ASEAN market through Thailand. Investment trends and origin show they are intimately linked to the geographic location. The country’s growth means that investments in infrastructures, manufacturing, hospitality, transport, retailing and energy are considerable. The government is welcoming foreign investments from companies such as Sony, LG and Coca Cola. For example, Coca Cola opened a US$200m bottling plant in June 2013, while Mitsubishi and Suzuki consider starting producing vehicles in Myanmar once the infrastructures are ready. In 2013, the foreign direct investment (FDI) represented US$3.5bn and was 350% above its 2011 level: Myanmar FDI is now at the same level as the Philippines FDI (US$3.9bn, 2013).

However, if we consider the foreign investment per capita, Myanmar is largely standing above Philippines and not so far from Indonesia. International organizations are very active in Myanmar. In January 2014, The World Bank announced a US$ 2bn plan, mainly to develop the health and energy sectors. Half of this investment will go for electricity related projects (generation, transmission and distribution) to meet the fast growing electricity consumption that doubled between 2000 and 2012 and to close the gap of the population that today has no access to electricity: an astonishing 70% of the population has still no access to electricity but the situation is improving rapidly (16% in 2006).

Opportunities in the energy sector

Myanmar has abundant energy resources, particularly in hydropower and natural gas. Hydroelectricity potential, only a small part of which is being exploited, is estimated at 342 TWh. Proven natural gas reserves total 496 bcm, and the potential for additional discoveries is considered by the government. Coal and oil reserves are low. Myanmar is one of the world’s oldest oil producers, having sold its first barrel in 1853, and until 2011, the upstream sector has been relatively underdeveloped. After the democracy came the country have opened up to international oil and gas players via three separate offshore block bidding license. The Myanmar Ministry of Energy (MOE) announced the results of the Myanmar Offshore Blocks First Bidding Round – 2013, on 26 March 2014. The round had attracted 64 bids from 36 international E&P companies for the 30 blocks offered. Of the 30 blocks offered, winning bids for 20 blocks were announced. The Myanmar Offshore Blocks First Bidding Round - 2013 was launched on 11 April 2013. A total of 30 offshore areas were offered, 11 shallow water blocks and 19 deep water blocks. Different PSC terms were offered for shallow water and deep water blocks with the key difference being the requirement of local partner participation for shallow water blocks. International companies entering into a Shallow Water PSC would have to work with a local partner, while companies entering a Deep Water PSC could carry out exploration without a local partner due to the high costs and technical expertise required. Once the PSCs have been signed, the operators would have an 18 month Environmental Impact Assessment and Study Period, after which it would have the option to enter into a 3 year exploration work programme.

In term of infrastructures, there are three out-of-date oil hydro skimming refineries with a total atmospheric distillation capacity of 57,000 bbl/d. In April 2014 Thai Oil announced the plans to build a new oil refinery that would have a capacity of 150,000 bbl/d. That would make it the first such large-scale facility constructed in several decades in the country. The company will propose the refinery as part of a bid to win a deal to upgrade two state-owned refineries in the south of Yangon, with capacity of about 20,000 bbl/d each.

Need of investment in the energy sector.

In 2012, electricity the production was 7.7 TWh of which 5.3 TWh (70%) were generated by hydropower plants. Hydroelectricity represents the main source of power generation with an installed capacity of 2,662 MW. Installed capacity for power generation by gas is 650 MW, oil 420 MW and coal 120 MW. Oil is mainly used for peak generation: electricity generated from oil represented only 0.5% of the total electricity generated against 11% of the total installed capacity. With more than 18 hydropower projects under construction and 30 upcoming projects, hydroelectricity in Myanmar represents a sustainable way to develop clean energy, reliable and secure power supply. Chinese companies have been awarded contracts for most of the hydropower projects currently under development in Myanmar (45 projects). At the same time, in anticipation of the growing demand for electricity, the government has implemented a mix power diversification policy by planning to build additional gas and coal plants.

Thailand and Myanmar are sharing a quite similar profile in terms of location, geographical situation, population, culture and religion. We can assume Myanmar should aim to become in terms of GDP similar to Thailand within the next 20-30 years. If we compare Myanmar and Thailand in today’s term of electrification, only 30 % of the Myanmar population have access to electricity versus almost 100% in Thailand.

Fig.5: Installed power capacity in MW per millions of inhabitants 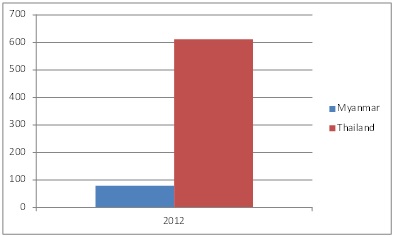 From a rapid analysis, it can be estimated that by 2035, Myanmar will need to install 32 GW to be at the same 2013 level of Thailand. On top of it, distribution facilities are old and require to be upgraded. The gas consumption per inhabitant in Myanmar is 15 times less than Thailand. In 2035 Myanmar is expected to consume about 20-30 bcm per year. Myanmar may also become a player in the LNG markets. Myanmar consumes slightly over 1 Mt of oil per year versus 48 Mt in Thailand. The forecast sees Myanmar oil consumption to reach 42 Mt in 2035. This will imply massive investments in the refining sector as the current capacity is obsolete, inefficient and insufficient to meet the demand. Coal consumption in Myanmar was slightly below 1 Mt in 2012 versus 20 Mt in Thailand and then should increase strongly in the years to come. For Myanmar exporting natural gas will help to build the economy due to a high gas price while coal remains cheap and easily accessible. According to EnerFuture assumptions, the cost of producing electricity from coal will be 25% cheaper than from gas in the region for the next decade. Additionally, gas supply remains unsecure; in 2012, Malaysia had to purchase electricity from Singapore for several months due to gas shortage. In 2013, Thailand’s had to buy electricity from Malaysia to cover shortage due to Myanmar’s operating offshore under maintenance. The almost 50 years of military dictatorship have slowed down the country developments and since 2011 Myanmar has been setting up energy policies to develop the country energy supply and facilitate international investment. The future looks very bright for Myanmar and many countries are directly involved in the development of the country with its own risks to mitigate for any country at this stage of high growth.