The European Union (EU) has been recording a serious drop of its refined oil products consumption since mid-2000s, as result of fuel substitution in industry and buildings and energy efficiency improvements in transport and since 2008 the economic crisis: the EU refined oil products consumption has dropped by more than 18%, from 4,840 mbl in 2005 to 3,950 mbl in 2013. Transport represent an increasing share of the total consumption (54% in 2013 compared to 48% in 2005) and its demand has been decreasing since 2007 under the double influence of the increased efficiency of cars and the economic crisis that hit severely the transportation of goods. The improvement in car efficiency has been driven by the labeling of vehicles and new tax system based on energy efficiency performances and more recently by the strengthening of CO2 emissions standards. Consequently, the EU refining market has been suffering of overcapacity which led to a significant fall in the production facilities utilisation rate and a squeeze of the refining margin. Although this trend started back in 2005, it has been accelerating since the global economic downturn of 2008 that has particularly hit the EU refining sector. Since then, more than 1.2 mbl/d of refinery capacity, among the most obsolete, has been shut down, mostly in France (380,000 bbl/d; Dunkerque, Reichstett Vendenheim and Petit Couronne), in the UK (270,000 bbl/d; Coryton Essex and Teesside Clarence), Germany (260,000 bbl/d; Wilhelmshaven) and Italy (230,000 bbl/d; Cremona, Rome and Mantova). 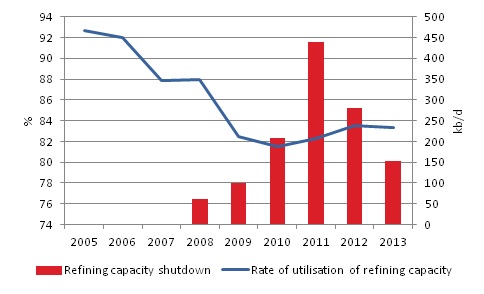 On the contrary, the consumption of refined oil products in the Middle East2 region is increasing rapidly (by almost 4%/year since 2000) and reached 2,500 mbl in 2013. Accordingly, the Middle East countries have upgraded their refining facilities to cope with their rising domestic demand. However, since the last few years these crude oil production countries have developed some large scale projects. In 2014 only, more than 1.2 mb/d of refining capacity will be put into operation (the 400,000 bbl/d SATORP, YASREF and Ruwais refineries), which is comparable to the capacity the European countries have shut down between 2008 and 2013. Refining projects gathered by Enerdata show that more than 2.2 mb/d of capacity are to be added by the 2020, with the largest projects in Kuwait (615,000 bbl/d Al-Zour refinery) and in Saudi Arabia (400,000 bbl/d Ras Tanura expansion project and 400,000 bbl/d Jizan refineries). 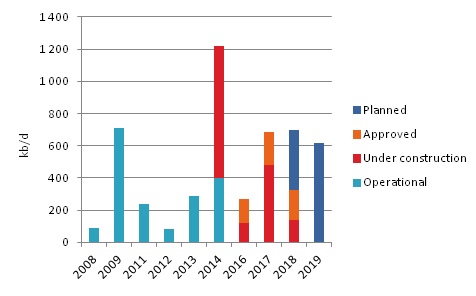 While Europe is struggling to finance the upgrade of its old refining facilities, the fact that most of the new projects in Middle East are designed to produce Euro-5 standard products indicates that the Middle East countries are keen to add some value to its oil exports rather than carrying on exporting crude oil only to Europe. However, it raised concerns that some of the proposed projects could not be financed as they compete between each other as an oversupply of oil products would also reduce the refining margin, destroy value and eventually not be backed by financial institutions. Notes: 1 Petroleum products production divided by refining capacity 2 Bahrain, Iran, Iraq, Israel, Jordan, Kuwait, Lebanon, Oman, Qatar, Saudi Arabia, Syria, United Arab Emirates, Yemen.