Just when you thought Nuclear Energy could make a comeback

Energy Scenarios for a post-Fukushima era. What impact on the nuclear energy industry and world energy markets?

In the past few weeks, the very idea of a nuclear renaissance - or perhaps recovery - has been turned upside down. Until recently, nuclear energy was still perceived by many analysts, policymakers, and utility managers as a reasonably affordable option to generate bulk electricity while increasing security of supply and mitigating climate change concerns.

The Chernobyl accident in 1986 almost stopped the development of the world nuclear industry in its tracks. Twenty-five years later, a nuclear revival was starting to materialize; with most projects under construction located in China, India, Russia and... Japan. Is the Fukushima accident going to derail this revival or will the impact remain limited to new programmes and projects being simply delayed?

Nuclear investment cycles have been driven by accidents, oil shocks, and market liberalization * 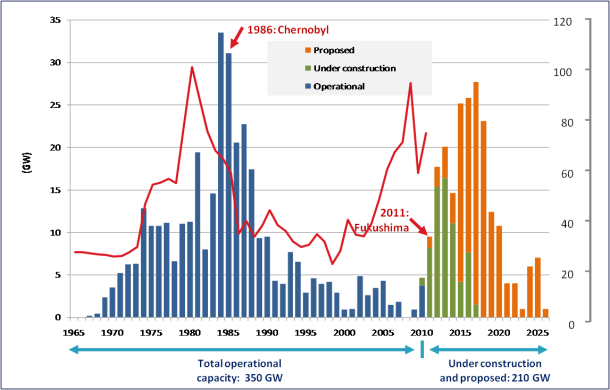 Chernobyl is not the only reason why the growth of nuclear technology receded in the last 25 years. First, the oil aftershock which lasted from the mid-80's to the early 2000's alleviated security of supply concerns and made fossil fuel power plants attractive again, in particular combined cycle gas turbine technology (CCGT). Second, the market liberalization in Western Europe and North America has also played a key role. Historically, most if not all nuclear power plants (NPPs) have been developed and funded by government owned utilities (France, Sweden, UK, Belgium) or utilities benefiting from strong government support (Germany, USA, Japan). Nuclear power plant owners could rely on stable electricity prices, long term contracts and state guarantees. The market liberalization process initiated in the 80's and 90's undermined the economics of nuclear energy. Although nuclear power can in theory compete on a levelized cost basis with other centralized power generation technologies, a number of factors are detrimental to nuclear energy in countries with liberalized electricity markets. The cost profile of a NPP is characterized by a very high CAPEX and a vulnerability to cost overruns and higher discount rates. Despite low fuel costs, a NPP is also fully exposed to market price volatility; a feature of liberalized markets. The lack of flexibility of a NPP makes it unable to benefit from price variations and vulnerable to the massive introduction of wind power which depresses spot prices and lowers the number of running hours. In contrast, CCGTs are considered much less risky due to low CAPEX, an ability to capture price volatility opportunities (extrinsic value), and a natural hedge provided by highly correlated electricity and gas prices. As a consequence, the financing of new NPPs through private sector capital and initiatives has proven very difficult and has so far never happened. In this respect Fukushima is unlikely to help.

World nuclear capacity in place and "pre-Fukushima" forecast: most of the growth was expected to take place in Asia 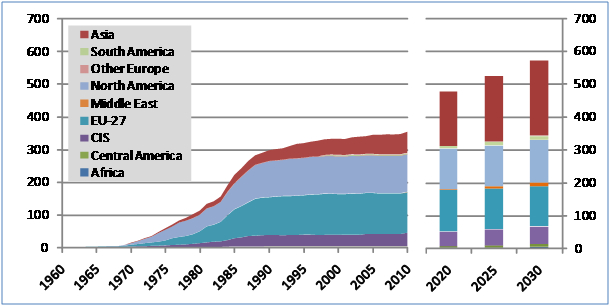 It is still too early to say what will be the full consequences of the Fukushima accident for the nuclear energy industry, but three main scenarios can be envisioned.

In all three scenarios, gas and possibly coal are likely to emerge as winners. A "new normal" for the nuclear industry may well lead to a new dash for gas in Europe and the US or a prolonged rush for coal in Asia, with consequences for future energy prices. At times of extreme energy prices and unprecedented volatility, the removal of the nuclear option, if it happens, can only contribute to increased market instability.

Nuclear power's future role in climate policies, it being one of the main options envisioned for the implementation of ambitious reductions, will have to be thoroughly reassessed by policymakers. Even if nuclear power has a low market share of the world energy demand, objectives and plans to reduce GHG emissions could be put at risk if alternatives are not developed and encouraged. On the supply side, Fukushima adds to the incentive to develop renewable technologies as well as Carbon Capture and Storage (CCS) despite the fact that CCS presents its own risks and is still largely unproven technology. On the demand side, largely forgotten energy efficiency policies and measures could be brought to the fore, and if resolutely implemented, impact the growth in energy demand in a significant way.

In these respects, Fukushima could prove a real turning point if it contributes to provoking a shift from supply side to voluntaristic demand side energy policies.