The Black Tuesday on July 31st marked perhaps the greatest power outage in world history: the blackout occurred in 20 of India's 28 States and affected 3 of its 5 grids (Northern, Eastern and North-eastern). With an estimated 600 million people without electricity, 50% of the population, this large-scale incident reveals the stress the Indian power system has been experiencing over the last decade.

India's power consumption has been growing at an exponential rate since 2002, at 8.3%/year, which correlates strongly with the real growth rate of its economy, however the electrification rate is still at around 66%. Power prices have been greatly subsidised for agricultural users and low-income households and tariffs have not increased significantly to cover for increased costs of fuels (and salaries) 1. This issue coupled with high transmission and distribution losses and low power plant load factors, have left India's State Electricity Boards with a difficult financial situation for a long time. The State has been pro-active in implementing a liberalization policy since 1991, implementing laws on vertical unbundling, encouraging the creation of Independent Power Producers, lowering taxes to attract foreign investment and favouring "fast-track" generation projects. This has led to significant changes in the power sector, with the emergence of several large IPPs in recent years, often linked to industrial groups: Tata, Reliance, JSW, GMR.

However, T&D losses and power theft still represent close to 20% of production, while capacity expansion falls systematically below the country's needs. The objectives fixed in the Five-Year Plans are rarely met: for the last three Plans, planned capacity fell short of estimated needs and the effective capacity installed dropped the realisation rate to 50%. By November 2011, 44.7 GW of the 78.7 GW foreseen by the 11th Plan (2007-2012) had been commissioned. With a revision of target capacities downwards and the 17.2 GW expected to be installed over 2012 (about 7.8 GW actually commissioned as of July), there is a clear improvement on the realisation rate but this should still not be sufficient to cover the rising needs of the country. Delays are often due to long lead times and disputes over obtaining environmental clearances, but they are increasingly due to fuel shortages. 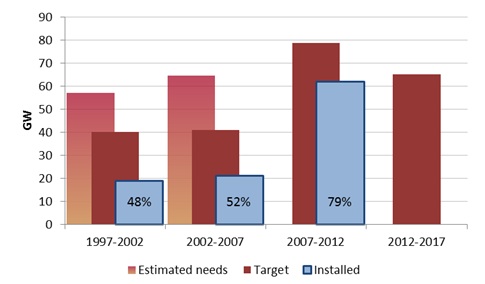 Indeed, Tata and Adani have recently put on hold several GWs' worth of new coal-fired projects due to a lack of clarity for both coal supply and the regulatory environment around coal prices. Coal production expansion has failed to meet rising demand from the power sector, hampered by issues of bad domestic coal quality, limited coal washeries capacity, transportation infrastructure bottlenecks, large distances between production and consumption, and disputes between producers, IPPs and the Government over the regulation of coal prices amidst higher international prices.

India is turning progressively to imports to ensure its supply: with sky-rocketing coal imports, India joined the world's top 3 largest coal importers (India outranked Germany in 2006 and South Korea in 2011), and the share of imports in domestic consumption grew over the last ten years from 6% to 21% in 2011. In Indonesia, Australia and Africa, Indian companies are facing fierce competition with Chinese, Brazilian and other companies to ensure their coal supply. Presently, over half of the world coal trade occurs in the top 4 countries, all of which are in Asia.

Net imports of coal and lignite for the top 5 importers in 2011; China does not include Taiwan 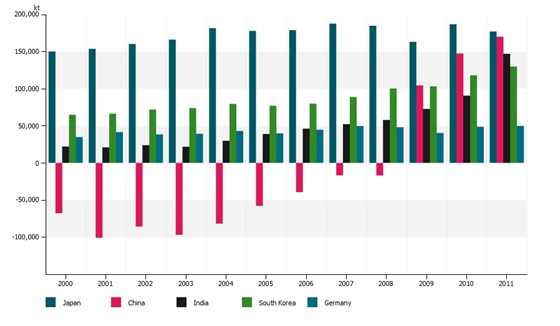 This situation is a key challenge for a country with an expected economic growth of 7-8% over the next decade (source: IMF). It is expected that the electricity demand will rise at an average rate of 5.5% over the next 20 years, which translates into a need of 420 GW of additional capacities for the power system, of which one third should be coal-fired plants - thus increasing coal demand for power by 50% to reach 760 kt in 2030 2. 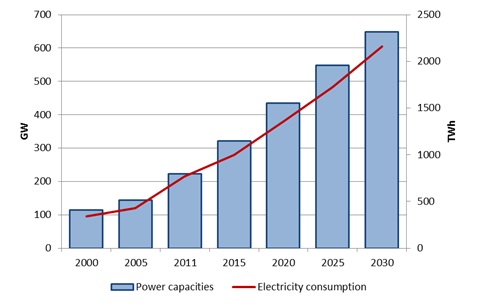 India is struggling to sort through a complicated situation mixing economic empowerment, access to energy, industrial policy and environment, as it moves towards its 12th Five-Year Plan (2012-2017) and beyond.

1 In 2010, India spent US$22bn in fossil fuel consumption subsidies, making it the 4th country in the world, just after Iran, Saudi Arabia and Russia, all four being large producers [source: IEA, WEO11]
2 All forecasts are realized with the POLES-Enerdata model, scenario EnerFuture Recovery+, July 2012