Hydro and Wind: Friends or Foes

With a 75% share, hydroelectricity is by far the main contributor to electricity generation from renewables in Europe. In 2011, it accounted for 16% of total electricity production and more than 20% of the total installed generation capacity. With 220 GW of installed capacity , hydroelectricity still dwarves wind power that stands at 96 GW. Despite its dominance, hydroelectricity is seldom discussed as a renewable energy resource of significance or importance. Policy makers and the media tend to focus their attention on wind and solar probably because the latter are fast growing markets with promises of new jobs and export markets despite serious setbacks in the last few years. Hydro is also overlooked because it is seen as a mature technology which potential has been largely exploited.

A geographical mismatch between hydro and wind resources

Technically speaking, hydroelectricity and wind complement each other well. Hydroelectric plants are highly flexible and can be ramped-up or ramped-down at very short notice (seconds) without the efficiency losses of thermal plants. Hydroelectricity can therefore mitigate wind variability in a very efficient way. The seasonal match is equally fairly good. Winds are generally stronger and more regular in the winter, at least in Northern Europe. The contrary is true for hydro, which reaches its maximum potential capacity in late spring or early summer, after snow has melted and filled the reservoirs.

Share of hydro and wind in total electricity generation (in %) 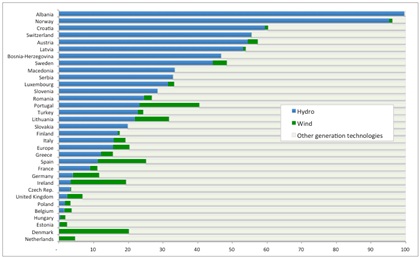 Despite the good technical match between hydro and wind, the correlation between installed capacities in both technologies at country level is low or rather, unidirectional. On the one hand, countries with a very high share of hydro (i.e. above 30%) tend to have little or no installed wind capacity.

On the other hand, countries with a very high share of wind have either a sizeable domestic hydro industry (Portugal, Spain and to a lesser extent, Ireland) or access to their neighbour’s hydro (Denmark). The absence of a strong link between hydro and wind can be explained to a large extent by the fact that the geographies of hydro and wind do not match well as shown in the map below. Rather than the raw wind energy potential, this map published by the EEA in 2008 gives an indication on the full cost of wind electricity across regions. It is a good techno-economic indicator of the future location of new wind power developments. 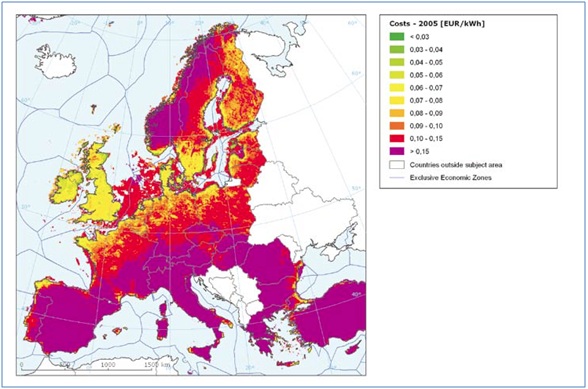 Countries with a good economic wind potential − such as the British Isles, Northern European countries with a coastline on the Channel, the North Sea or the Baltic Sea − do not necessarily have a good or direct access to a significant hydro resource. The best hydro resource is generally found in mountainous or hilly regions (the Alps, the Iberian Peninsula, Norway, the Balkans, etc.) and is often poorly connected with windy regions.

Scandinavia is an exception as its vast hydroelectric capacities contribute significantly to the balancing of the Nordic synchronous electricity area. This has made high wind penetration in the Danish electricity system possible.