1 Jun 2021
European challenges and perspectives for the battery industry

The global demand for batteries will increase tenfold by 2030 compared to 2020, driven by the growing needs of electro mobility. While it was long thought that the main catalyst for electro mobility would be the inevitable depletion of oil resources, global warming is actually the main driver of this transition. Outside the mobility sector, demand for batteries is also expected to grow substantially over the next decade in the currently marginal electricity storage market.

This Executive Brief analyses the main drivers of the global battery market, before focusing on a European initiative, the European Battery Alliance, which aims to foster the development of the European battery industry and helps it get competitive at world level.

Overview and outlook for the global battery market

The transition to electro mobility

The transport sector is one of the main contributors to climate change: in the EU, it accounts for more than 25% of greenhouse gas (GHG) emissions, three quarters of which come from road transport. It is also the only sector whose emissions continue to rise.

The number of electric vehicles (EV) on the road worldwide will increase from 50 million in 2025 to 135 million in 2030. China currently possesses almost half (47%) of all existing EV. It will concentrate most of the total demand for batteries by 2030, while the European Union (EU) will become the second largest market worldwide. In addition, the economic crisis related to the COVID-19 pandemic seems to be accelerating the process of electrification of the car fleet, particularly in Europe.

Other transportation modes also contribute, albeit more modestly, to the demand for batteries (e.g., two- and three-wheelers), or could do so in the future (buses, lorries, ships and planes). Almost all of the current electric buses fleet is concentrated in China. However, there are more options than electrification to decarbonate buses and lorries (biogas, hydrogen), while this is but a far-off perspective for ships and planes at this stage.

Worldwide, global storage capacity in 2019 was around 200 GWh (just a few seconds of global needs). Today, 90% of storage is done using pumped storage technology, but the growth potential of this technology is limited due to the lack of appropriate locations and its costs.

Battery storage has been rising steadily in the past few years and is set to enjoy exponential growth over the next decade, driven by electricity generation from intermittent renewable energy sources (most notably photovoltaic solar and wind). Battery storage could also eventually replace a large part of the production capacity of peak power plants, which are used to adjust supply in real time but have high production costs, as they are only used a few times a year.

Today, battery storage is mainly based on lithium-ion batteries, but other technologies may be more suitable in the medium to long term. Sodium-sulphur batteries or flow batteries, for instance, could offer better performance for longer storage times.

Asia is at the heart of the global battery industry:

Japan and South Korea control nearly two-thirds of the international patent families filed on the lithium-ion technology between 2014-2018. Asian countries, Japan in particular, have also taken a significant lead in patenting breakthrough technologies such as the solid-state battery, considered the next revolution in the sector.

China has emerged as the leader in the global battery industry across all segments of the value chain, from ore production to refined products, battery packs and components. For instance, the Chinese industry produced 83% of the anodes and 61% of the cathodes manufactured worldwide in 2019, two key components which account for almost a quarter of the average production cost of a lithium-ion battery. And its prominence in the global battery industry will remain strong in the 2020s: at the end of 2019, it accounted for 69.3% of the global production capacity announced for 2029.

Meanwhile, US interest for batteries started late. The country waited until 2009 for a massive investment programme in energy storage technologies. However, the mid-2010s saw a real expansion of storage capacities using lithium-ion batteries with foster measures at state level.

Battery types and their geopolitical challenges

Lithium-ion batteries are at the core of a new geopolitics regarding raw materials. Several battery minerals have been classified as critical raw materials by the EU, such as lithium, cobalt and natural graphite. China is conducting an offensive diplomacy to secure its supplies through the purchase of foreign mines by Chinese companies. Industrial players regularly express their fear that global supply will be insufficient to meet demand.

Lithium-ion batteries include several types of batteries (LCO, LMO, LFP, NCA, NMC). NMC batteries are the most commercialised in the world due to their success in the automotive market. Between 2010 and 2019, the average price of an EV battery pack has decreased by 87%. Another area of development for battery manufacturers is to reduce their consumption of critical minerals, in particular cobalt.

New generations of batteries under development could reshape the global energy storage market. Patenting efforts on the solid-state battery have intensified in recent years. This fourth-generation technology is said to offer significantly better performance than the lithium-ion battery for automotive use. Fifth-generation technologies include sodium-ion, lithium-sulphur, lithium-air and flow battery. 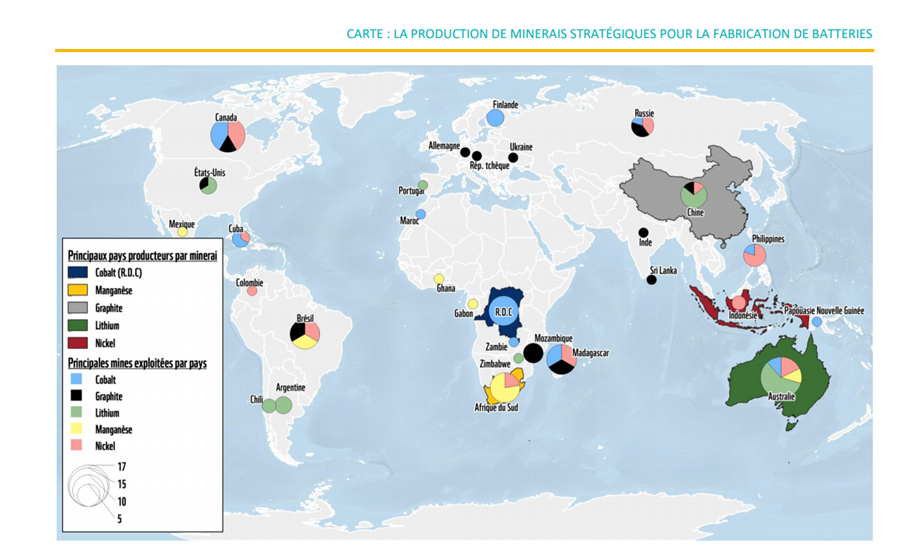 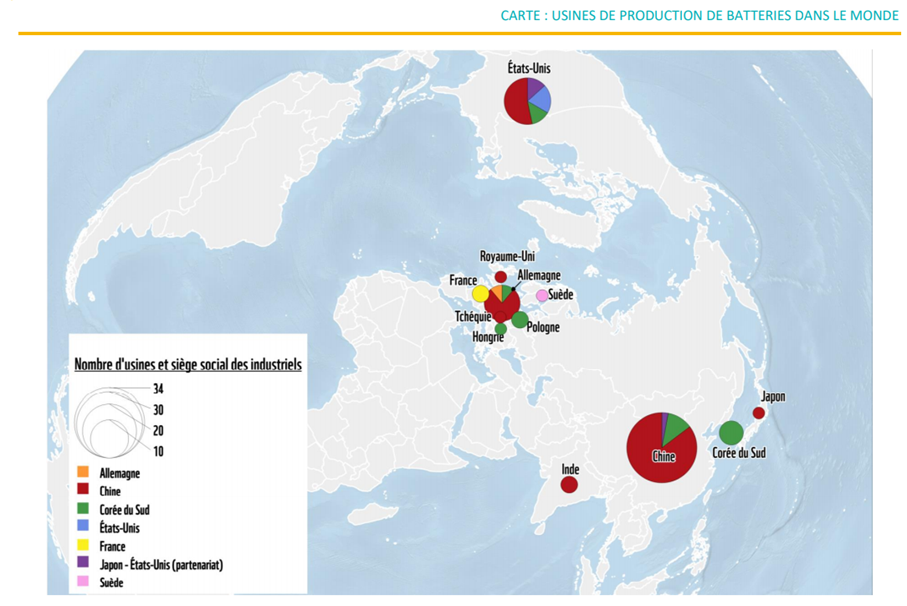 The EU has set ambitious targets to reduce its greenhouse gas (GHG) emissions with the aim of achieving carbon neutrality by 2050, in line with the commitments made in the Paris Climate Agreement in 2015. This energy transition strategy, reaffirmed in the European Green Deal launched in 2019, results, among other things, in two major parallel structural developments: the electrification of automotive transport and the rapid development of renewable energies for electricity production.

Storage is at the heart of this evolution:

The EU is dependent on non-EU suppliers across the battery value chain, as it does not yet have a mass production capacity for battery cells. Moreover, the EU heavily relies on imports to meet its internal demand for critical materials (100% for lithium, 98% for natural graphite, 86% for cobalt). And the geographical origin of European imports is highly concentrated: Chile accounts for 78% of lithium supplies, the Democratic Republic of Congo provides 68% of the EU's cobalt imports and China provides 47% of the natural graphite imported by European countries. These dependencies create both an economic and geopolitical risk.

The birth of the Alliance

The European Battery Alliance (EBA) was launched by the EU in October 2017 to enable Europe to retain as much value creation as possible in the automotive sector. The alliance aims to provide the continent's industry with an independent battery development and production capacity. Key actions centre on:

The EBA proposes an integrated approach across the entire battery value chain with a "horizontal" logic based on cooperation between the sector's industrial players.

The Commission aims to ensure that the sustainability of the battery manufacturing process becomes a competitive advantage for European companies. The aim is to prevent the electrification of the European car fleet from resulting in the commercialisation of imported solutions with a heavy environmental footprint.

The alliance relies on several financial instruments, such as European Investment Bank (EIB) loans, funding from the Innovation Fund, and the European budget. The European Commission has also launched in 2019 a European Technology and Innovation Platform named “Batteries Europe” to coordinate national and European research programmes on batteries. And put together a large-scale research initiative called "Battery 2030+", with funding earmarked for basic and applied research projects on future battery technologies.

The real innovation of the EBA in terms of funding is the use of a mechanism called "Important projects of common European interest" (IPCEI), which allows Member States to support transnational projects of strategic importance for the EU. A first IPCEI was authorised in December 2019: seven Member States provided €3.2 billion in public aid to develop the European electric battery sector, with a consortium of 17 companies from the entire chain of value, such as the car manufacturer BMW or the chemical companies BASF and Solvay, but also several small and medium-sized enterprises (SMEs). A second IPCEI has been approved in January 2021, involving 12 countries and a €2.9 billion funding.

A few years after its launch, the European Battery Alliance seems to be on its way to succeeding. Indeed, the EBA has so far played its role as a catalyst for the emergence of a European battery industry, with more than 500 industrial and research players having joined the network by the end of 2020, forming a vast knowledge and innovation community across the continent. By bringing together players from different sectors, the EBA has helped to initiate industrial partnerships that have already led to the launch of major investment projects with public funding. Some 15 Li-on battery plant projects have been launched in Europe (including both pilot plants and mega-plant projects) and a further ten or so have been announced. If successful, they will add a total of around 500 GWh of production capacity for Europe by 2030, making it the world's second largest producer of lithium-ion batteries after China and potentially creating 35,000 to 50,000 jobs.

Several European mega-factory projects are emerging thanks to EU efforts. Two of them, very different in their approach and purpose, stand out:

Next challenges for the EBA

The ultimate success of the EBA will be measured by the ability of European manufacturers to effectively produce competitive and sustainable batteries, i.e., to convince car manufacturers to favour local sourcing rather than buying imported batteries from long-established manufacturers. It is therefore only when the first mega-factories come into operation, by end 2021/2022, that it will be possible to assess the quality and relative cost of European production (whether from European companies or foreign companies based in Europe).

A number of challenges remain to be solved to ensure the full success of the project:

This Executive Brief stems from an analysis by Enerdata, the French Institute for International and Strategic Affairs (IRIS) and Cassini for the French Ministry of Defence (full report available in French here).