What is the future for housing energy expenditures?

Energy prices in Europe have continued to increase in 2011 by almost 15%, and should continue to grow if crude oil price remain above $100/bbl. Past crude oil price increases have impacted households’ energy bill strongly. Will housing energy expenditures continue to be impacted the same way in the future?

During the 90’s consumers benefited from stable world energy markets, however this stability was short-lived with the average energy prices for housing and world energy prices surging since 2000. Oil and gas prices have since then increased by 40%, electricity by 20% and coal by about 50%. This hike in prices is in direct correlation to the soaring international market prices: natural gas price has doubled, coal price has tripled and oil price is up four-fold. 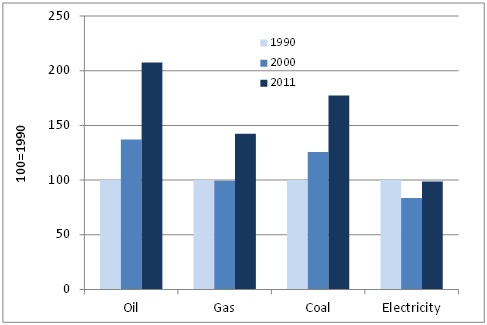 These increases have had a strong impact on household energy expenditures in Europe. They have increased by about 40%[1] since 2000 whereas the energy consumption per dwelling has fallen by 10% and without any significant increase of taxes, except in Germany. The largest rises occurred generally in countries with the lowest spending in 2000. Czech households experienced almost a tripling of their bill despite a drop by 8% in their consumption per dwelling. This rise was mainly due to the large climb in gas price (+40%) and electricity price (30%), which represent respectively 40% and 20% of households’ energy consumption. The bill for Polish expenditures boomed mainly because of the explosion in coal prices (+40%). The bill for British, which was among the lowest in 2000, has nearly caught up to the level of Spain, Italy, Sweden, Netherlands and France. Expenditures have also increase by 60% in Germany due to a 50% rise in gas prices and a 60% rise in electricity prices, of which half was the result of increased taxes. With a bill of more than €2 000 per year, Czech, Polish, German and Finish households have then become by far, the citizens with the highest energy expenditures, whereas the average bill in other countries stand at about €1 500 per household. They are, with Swedish, consumers with the highest share of energy expenditures in the income (more than 5%).