The future of Gas-To-Liquid (GTL) industry

It seems that the Gas-To-Liquid (GTL) industry may revive a new wave of interest for projects. Today we are used at GTL big size projects to enhance energy security and monetize gas as oil in place rich of gas and poor in oil. At the same time the development of new technology will allow GTL to be used in small scale. Small scale GTL will open up new resources such as capture gas from off-shore deepwater oil wells, target zero flare emissions, and make economic stranded small gas fields. This Analysis will highlight the whole GTL industry, from his history to his future. When we think about natural gas, we always think about it being the cleanest fossil fuel, but it can soon be an unnecessary “friend” when it becomes a waste by-product from remote offshore oil wells. As it is a by-product, the flared gas volumes estimates are directional rather than definitive. They illustrate the magnitudes of flaring activity, as well as the direction of national and global trends in flaring activity. From the chart below we can see how the US “Shale factor” helped US to become one of the top flare producers in the world (from 3 bcm of flared gas in 2005 to 9 bcm in 2012). Another important point to note is that the global flaring has flattened in the last few years and not reduced as planned by each country. Not to underestimate that the total top 20 countries flared gas in 2012 is equivalent to 85% of gas production of Canada or more than 90% of total China gas consumption in 2012. 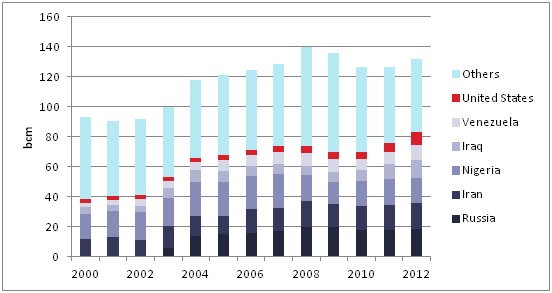 What we have noted in the last couple of years, is a bigger interest in developing small GTL plants to be used in increasing the financial returns of very costly deepwater offshore oil production sites. The GTL technology helps to convert natural gas resources otherwise flared into oil product resources. The GTL technology utilizing the Fischer Tropsch (FT) technology is not a new technology. It was used by Germany to fuel tanks, ships and planes in World War II with the most expensive and cleanest fuels of that time which were produced from low-grade, brown German coal which was gasified to produce the midstream syngas building blocks. South Africa also used the process during the apartheid era of isolation. GTL technology is renowned to be not economically feasible unless its scale is large enough. Today there are only four large scale GTL plants operating in the world (see figure 2)

It is worth spending a word about the Pearl Project accomplishments. The project costs at Pearl soared to US$19bn from the initial US$5bn estimated at the Final Investment Decision (FID) stage. Shell Middle Distillate Synthesis (SMDS) process is used at Pearl GTL plant, the same process developed over more than three decades ago, and operating on a commercial scale at the 14,700 bbl/d Bintulu GTL plant in Malaysia. The plant is a zero water emission plant, i.e. the water recycling plant treats water for re-use in steam production and cooling. It can process 45,000 m3/d of water, without discharging any liquids from the plant. Currently, there are few GTL projects under development and at different stages: 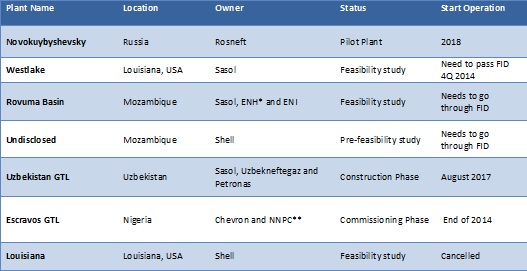 *: ENH (Empresa Nacional de Hidrocarbonetos) is the Mozambique’s national oil company. **: NNPC is the Nigerian National Petroleum Corporation. More details of the above projects are given below.

GTL industry seems to be living a new youth thanks also to the few companies that have been investing on small scale GTL technologies and making it to become viable. To note that to date there is no one small GTL plant commercial operating and at the same time the last few months have witnessed an increase of announced interest or projects involving small scale GTL. Enerdata is following closely the developments for small scale GTL plants because their utilization could monetize 140 bcm of flared gas and open up access to more than 50 Gboe of stranded gas. To give a prospective about the size of the number we are talking to the same size of even more than Libya''s total oil reserves.

Enerdata already takes into account the technology development within our POLES forecast model to support our clients in assessing the future energy market dynamics and the benefits that GTL technology, whether large or small scale, will make to their shareholders. If you are planning to embark in a GTL project then please contact our experts at asia@enerdata.net. Notes: 1http://www.reuters.com/article/2014/07/10/gtl-shell-idUSL6N0PL4Y620140710