EU Energy & Climate Policy 2030 Targets: How and How Much?

To support the EU’s process of moving towards a low carbon economy, Enerdata recently produced detailed quantified scenarios for the energy sector and GHG emissions for the UK’s Department of Energy and Climate Change (DECC). These scenarios and the public report assess costs and benefits to individual EU Member States under different scenarios of climate targets, effort sharing and renewables contribution to 2030, including abatement costs, permit trade, renewables support, improved air quality, and diversity of energy supply. Our study shows that the costs of either 40% or 50% emissions reduction targets compared to 1990 would be moderate at the EU level, and that an additional renewables target would add greater cost than allowing Member States to meet an emissions target under their own least cost method. To continue the process of transforming to a low carbon economy and set the next waypoint to the EU’s 2050 objective of reducing GHG emissions by 80-95%, the European Commission and Parliament have each released their proposals on the EU’s 2030 framework for climate and energy policies. Enerdata produces detailed quantified scenarios for GHG emissions and the energy sector using POLES, a world energy-economy model that fully describes the energy system and associated GHG emissions, to assess costs and benefits to EU Member States under different scenarios of 2030 climate targets and effort sharing. Scenarios can include various levels of GHG targets, alternative access to international credits or designs for the EU ETS, RES burden shares and energy efficiency measures. What are the costs and benefits to Member States under different types of EU targets? We can assess them through several aspects, such as: abatement cost; permit trade; renewables support and subsidies; improved air quality and health; diversity of energy supply; expenditure for energy provision; and reduced costs of meeting longer term emission reduction targets. Below is a case study of the type of analyses and results that we can produce looking at different EU 2030 climate targets and burden sharing efforts.

Costs are given relative to a Reference case, which continues the 2020 effort level in a ‘business as usual’ scenario, to indicate the additional costs needed to achieve 2030 targets. The Reference case includes current European policies with EU-level climate policy continuing beyond 2020 (i.e. maintaining the current EU ETS cap trajectory). Member State legislation or policies beyond 2020 (i.e. current renewables subsidies are phased out) and not extended and conservative estimates of energy efficiency measures are used. A GHG target of 40% could cost between 0.1-0.3% of EU GDP in 2030 compared to the Reference case, equivalent to a reduction in the average annual growth rate from 2014-2030 of 0.01-0.03 percentage points. As the GHG target in 2030 increases, costs rise but remain below 0.6% of GDP for a 50% target. Using international credits (e.g. CDMs or NAMAs) helps to reduce domestic costs to less than 0.5% of GDP, equivalent to a reduction of 0.03 pp in the average annual growth rate.

Implementing a GHG emissions reduction target will promote less dependence on foreign energy sources. By 2030, the EU could reduce its energy import bill for fossil fuels by over 0.4% of GDP, and hence improve its energy security. Reductions in oil imports make up two-thirds of this reduction, while fewer gas imports provide most of the remainder. Reduced reliance on coal-fired electricity generation could lower EU health costs from respiratory illnesses by an average of 0.1% of GDP in 2030. Benefits are primarily concentrated in eastern European Member States that currently generate a high proportion of their power from coal and also have a strong forecasted growth in electricity demand.

The power sector provides some of the most easily available sources of mitigation options and will likely include the majority of reductions to 2030. Decarbonising the EU’s electricity supply can help provide important momentum on a low-carbon path. Power sector emissions are almost 27% lower in 2030 under a 40% GHG target compared to our Reference case. 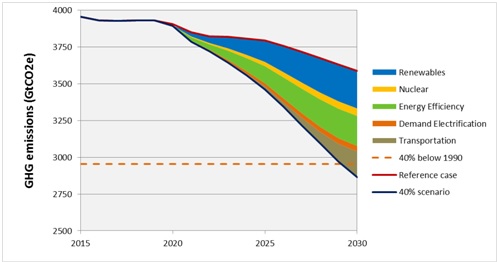 Different potentials for abatement across Member States mean that there is scope to reduce overall costs at the EU level through emission permits trading and appropriate burden shares. Member States that can achieve reductions more easily will be able to sell excess credits and earn profits from their contributions to the overall EU climate goals. Countries that find mitigations are too expensive can purchase credits for less than the cost of domestic mitigation actions. By 2030, the ETS trading volume could reach 10% of the total reduction objective; Eastern Europe will generally be credit providers due to their large potential to replace older less efficient power plants, mainly coal generation facilities.

Our study shows that Chinese companies invest mainly in large-scale dams for overseas projects. However, it is important to notice that “small” hydro plants are also concerned, these represents more than 50 projects.

The cost of a 40% GHG target combined with a 30% renewables target that extends the 2020 Climate Package burden sharing to 2030 is estimated to be over 33% greater than the GHG target alone. This additional cost represents a mismatch between forecasted renewables potential and previously negotiated Member State targets. Different burden share methodologies could reduce these costs by providing a more cost-effective distribution of efforts. 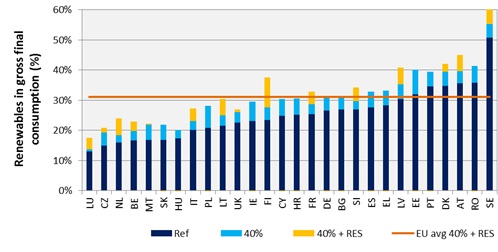 The starting point of all scenarios in the POLES-Enerdata model is up-to-date databases, including a complete data set for economic growth, energy demand (and associated emissions), energy prices, power production and capacities for all world regions up to and including 2012. Our Reference case meets the EU 2020 Climate and Energy Package objectives, and then extends this same effort level to 2030. Variant scenarios can differ many factors, including burden shares under GHG targets in 2030 (e.g. 40%, 50%, or 60% reductions), alternative assumptions on access to international credits (e.g. 0%, 5% or 10%), RES burden shares by Member State or only at the EU-level, and energy efficiency efforts. Marginal abatement cost curves (MACCs), based on a full technological description and load curve simulation for the power sector, underpin our analyses on effort sharing. Econometric demand functions for final demand sectors (including short and long-term price elasticities) and realistic fuel price simulation provide the framework for calculating costs to Member States. A carbon price that adds a premium to fossil fuel prices for consumers affects the competitiveness of different fuels in the energy system based on their carbon content; as a consequence, less carbon intensive fuels are consumed as the carbon price increases. Enerdata has worked in close contact with other EU energy and climate ministries on climate target issues, including DG ENER, DG CLIMA, UK’s DECC, France’s DGEC, and Denmark’s DEA. The DECC final report “Costs and benefits to EU member states of 2030 climate and energy targets: Enerdata report” can be downloaded for free here.