Covid-19: the drop in energy consumption in 2020 will be unprecedented

In recent days, the coronavirus health crisis has forced companies to operate in slow motion and people to stay home to work, leading to a significant drop in final energy consumption. In this analysis, we take a look at the situation in France.

Based on the first macroeconomic estimates available and the lessons learned from other periods of crisis, we estimate that the impact of two months of containment on final energy consumption in 2020 in France would have an effect higher to that observed during the last financial crisis in 2008 or the 1975 first oil shock.

In this article, we summarize the main scenarios on the evolution of energy consumption in 2020. This analysis has been prepared by Morgan Crenes, head of the Data & Research department at Enerdata, and Carine Sebi, Professor and coordinator of the Chair Energy for society at Grenoble Ecole de Management.

According to the latest INSEE forecasts, economic activity during this period of confinement is around 65% of the normal level in France, which will result in a record drop in energy consumption in the industrial, tertiary and transport sectors. Based on these figures, we estimate a drop in energy consumption of -35% in the tertiary and industrial sectors and an 80% drop in passenger traffic. In view of the continued existence of the logistics chain for goods, we assume that consumption will not change for freight traffic or agriculture.

The residential sector is experiencing a significant increase in energy consumption (estimated at around 15%), since a large part of the population has to stay at home and therefore needs more heating, lighting, use of electrical appliances, etc.

Thus, the evolution of all these activities led to a 15% drop in electricity demand (all sectors combined) in March in France, as confirmed by RTE, the French grid manager.

In our further analysis, we estimate the impact of the coronavirus on final energy consumption over the year 2020.

Since the beginning of the health crisis has been difficult to know the duration of the lock down, which is currently supposed to last two months. But it is even more difficult to assess its impact on economic growth.

At the onset of the crisis, the draft amended budget bill set the hypothesis of a -1% decline in GDP in 2020, assuming a rapid economic recovery. A few days later, this estimate was revised and "will certainly be much higher" according to French economy and finance minister, Bruno Le Maire, who "does not believe in the magic wand" at the end of the crisis. The French government announced on the 14th of April a 8% decrease of the GDP in 2020 compared to its 2019 level.

What is certain is that the fall in activity will depend on the duration of the lock down. We therefore established four scenarios according to (i) the duration of the lock down which should last at least two months following Macron’s statement on the 13th of April, and (ii) the speed of recovery of the economy which could be fast or slower, as indicated by the French Minister of the Economy. Regarding the latter hypothesis, we establish that the macroeconomic impact of a slow recovery of the economy would include both the short-term shock and a slower growth rate for the rest of 2020 as observed during the last financial crisis.

Based on our four scenarios and the Enerdata statistics, we assess the impact of the health crisis on energy consumption in France for the year 2020.

In scenario 1, according to which the lock down would be limited to two months and economic recovery would be rapid and immediate, total energy consumption would fall by 4.6% compared to what we would observe without the health crisis in 2020. If the economy were to recover more slowly after two months of lock down (scenario 3), then the impact would be more pronounced and the drop in energy consumption (-9.2%) would be higher to that observed after the 1975 first oil shock.

If the lock down lasts three months, then the effects would be multiplied, and in the worst-case scenario (scenario 4) final energy consumption in France would fall by 11.5%, an unprecedented decrease in the past 50 years.

Figure 1: Impact on final energy consumption compared to a scenario without a health crisis in 2020, and evolution of climate-adjusted final consumption in France during the financial crisis of 2008 and the oil crisis of 1975 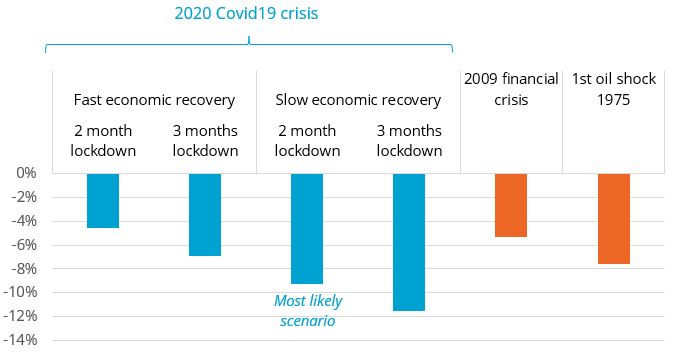 All these estimates should obviously be taken with great caution and represent a first order of magnitude of the impact of the coronavirus on energy consumption in France.

Many agree that once the crisis is over, we will see a rebound effect in 2021, with consumption starting to rise again and cancelling out the 2020 trend. See you in 2021 for a more in-depth assessment!