This article focuses on China’s energy policy, its economic diplomacy through the Belt and Road initiative, and how this shapes its relationship with the African continent. It stems from an analysis by Enerdata, the French Institute for International and Strategic Affairs (IRIS) and Cassini for the French Ministry of Defence (full report available in French here).

After unsuccessfully trying autarky in a bid to ensure its independence and security, China opened to the world from the 1980s onwards and is now totally integrated in, and interdependent with, the global economy. Current policy is not to reconsider that interdependence, but to diminish the country’s vulnerability by securing the flows, mainly maritime, of supplies (particularly energy) and exports of the Chinese economy. For the Chinese regime, the fundamental problem is not so much China's dependence on the market as the hegemonic position of the United States (USA) on the seas, particularly around China.

It is in this context that China's relationship with the African continent should be analysed. Part of it stems from China's dependence on energy imports, due to an energy mix that is still largely dominated by hydrocarbons. But Africa is still a small player on the world oil and gas scene, and Beijing’s interest goes beyond the simple question of energy supplies and is part of a more global economic, geopolitical and strategic expansion strategy. The Belt and Road Initiative (BRI) is its main instrument.

The Chinese energy policy is structured by several constraints:

Figure 2: Production and consumption of natural gas in China 1973-2018 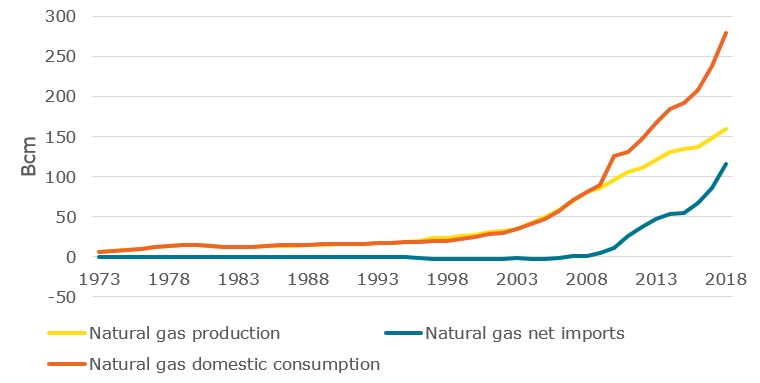 China is since 2008 the world's largest consumer of primary energy. Its share of global primary energy consumption jumped from 8% to 22% between 1980 and 2018. It increased six-fold over the same period, to reach 3,164 million tonnes of oil equivalent (Mtoe) in 2018. China’s primary energy consumption remains dominated by coal, for which China is almost self-sufficient and which accounts for nearly 60% of its total consumption and most of its power generation. This is followed by oil (just under 20% of consumption) and natural gas (7.3%), largely dependent on imports. Nuclear and renewable energy sources (RES) see strong growth, but their share stays relatively low (2.5% in the case of nuclear, which stays below current government ambitions). 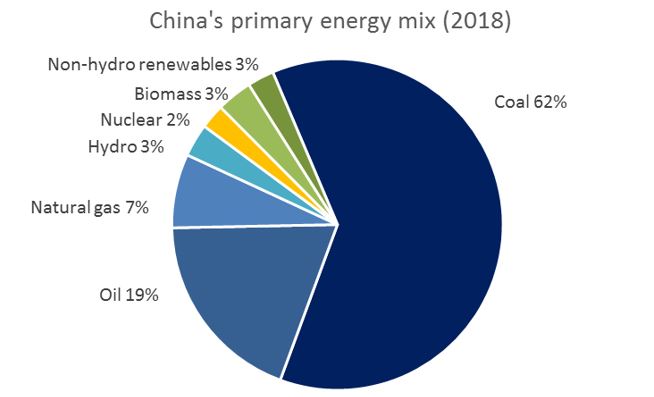 Tackling the oil and gas dependence

Becoming a net importer of both fuels (since 1994 for oil and 2007 for gas) has added a strategic dimension to China's oil and gas policy. China is already the largest importer of oil and gas worldwide and consumption is still rising strongly.

But this increasing dependence did not remove the competitiveness and energy transition constraints, forcing China's energy policy to articulate several, partly contradictory, objectives. To secure supplies, the government aims to:

This axis aims to multiply oil and gas suppliers and reduce dependence on the Middle East. Alternatives are Central Asia, Russia, South East Asia, and Sub-Saharan Africa (SSA). In this strategy, the importance of SSA is unquestionable, particularly Angola (from where China imports nearly 1 Mb/d.) and more recently the Republic of Congo and Gabon.

The main objective is to develop terrestrial alternatives to the maritime route via the straits of Ormuz and Malacca, as the USA control the seas.

This axis’ objective is to secure the maritime space between the Gulf and China (South China Sea, Indian Ocean), especially the main supply route from the Persian Gulf (and Africa) via the Strait of Malacca, controlled by the US Navy. To do so, China constructed, purchased or leased on the long-term port and air facilities for its navy in most countries along the route (India excepted).

The objective is to support Chinese companies abroad by granting financial loans to producing countries that welcome them. Securing the supplies is a very secondary objective, as the produced oil is sold on the market, and not necessarily to China.

Sub-Saharan Africa (SSA) occupies an important place in this strategy. It is a potential source of supply, even though African oil and gas production remains very modest compared to China's needs and the involvement of oil companies in exploration and production in Africa remains low (see below). SSA has also become, together with the Chinese base at Obock in Djibouti, one of the key anchors of China's military in the Indian Ocean. And it is one of the new areas of expansion for the international activities of Chinese companies.

The Belt and Road Initiative

This initiative was launched in 2013 as Chinese president Xi Jinping announced the double project of connecting China to Europe by land through Central Asia and thus creating a "Silk Road Economic Belt", and to develop a maritime communication route between the two continents. It has since then become the main pillar of Chinese economic diplomacy.

The official objective of the BRI is "to promote the economic prosperity of the countries along the new Silk Roads (Belt and Road), to promote regional economic cooperation, to enhance exchanges and mutual understanding among civilizations, and to promote peace and development in the world". It offers partner countries the possibility to finance and build a wide range of new infrastructure, particularly in the field of communication and transport (roads, railways, ports, airports, pipelines, internet network, etc.) and energy. Today, not only have most Asian countries and many European countries joined the initiative, but also almost the entire African continent and some Latin American countries. In addition to building infrastructure, the BRI has four other components: policy coordination, trade and investment facilitation, financial integration and cross-cultural exchanges.

Through the BRI, China is making clear its power ambitions as a global player and intends to adopt a much more proactive stance on the international stage than before. Beyond supporting the country's economic growth, giving China's national currency international stature, and strengthening energy security, it has a strong diplomatic component seen in the development of the Belt and Road International Forum and the signing of cooperation agreement with partner countries. The second forum, in May 2019, focused on the fields of energy and telecommunications. It included the signing of an agreement between the African Union and the Global Energy Internet Development Cooperation Organization, initiated by the China State Grid Corporation, the major state-owned company in charge of managing the electricity grid in China.

Africa in the BRI

Although Africa is not the centrepiece of the BRI, the continent has been attracting special attention from China for at least two decades, well before the BRI was launched. Indeed, Africa offers a range of characteristics that are perfectly in line with China's economic and strategic objectives as defined in the BRI:

Figure 4: Reserves and production of crude oil in Africa, 2018 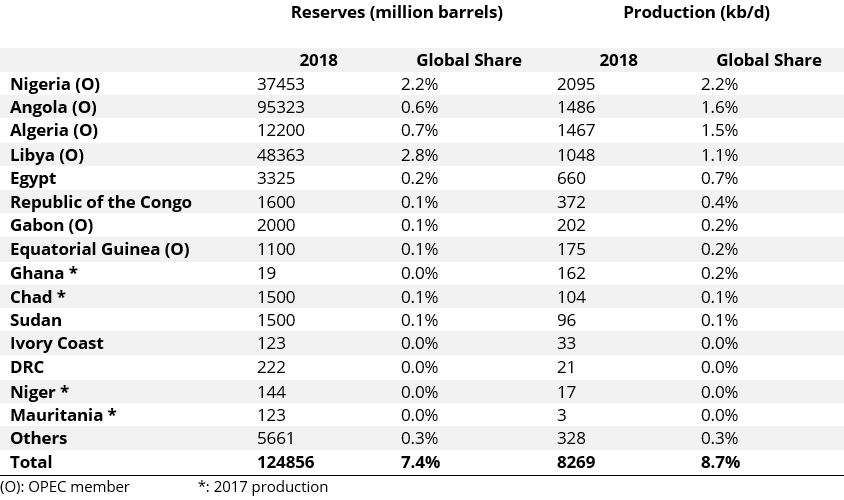 Over the last twenty years, Africa has become one of the world's most attractive oil-producing regions to foreign investors. Why? It is not so much because of the amount of oil it produces, which is insufficient to cover all of China’s needs. However:

As a result, Africa is one of the regions of the world where production and reserves of both oil and natural gas have increased most significantly over the last two decades, thanks to the multiplication of important discoveries (the continent accounted for nearly 20% of global oil discoveries between 2011 and 2014 and for nearly 50% of gas discoveries over the 2011-2018 period).

The new strategies of China in Africa

China is not primarily interested in Africa for its energy and mineral resources. While those resources exist (and a part do end up in China), since they are insufficient to meet the needs of the Chinese economy, especially oil. Besides, imports from Africa are shipped by sea. Since China wishes to escape the maritime control of the United States, especially over the strait of Malacca, the African imports do nothing to bolster Chinese supply security.

However, Africa is of strategic interest as an international development field for Chinese oil companies seeking to become global players and compete (in the future) with the biggest international oil majors. The continent enables them to build up a diversified portfolio of reserves and develop their management and technological skills. Africa is also a significant market to produce Chinese goods and services (particularly in infrastructure construction).

The trade between Africa and China has seen explosive growth over the last two decades, from $10 billion in 2000 to over $200 billion in 2018, and China has become the continent's largest trading partner. The trade balance with China was generally favourable to Africa until 2012, but it has since been marked by large trade deficits ($46 billion in 2016, equivalent to Africa's trade deficit with the rest of the world, while the volume of Africa's trade with China was only 15% of Africa's total trade with the rest of the world).

China is not a major investor in Africa, contrary to popular belief. Chinese FDIs to Africa represents only 1.2% of China's total FDIs in the world and tend to decline in absolute terms. China finances and builds infrastructure in Africa and is more of a creditor and service provider than an investor, while Africa is more of a customer than a partner. In the end, African countries pay for these infrastructures themselves by indebting themselves to China.

Most of the infrastructure construction projects carried out by China in African countries are handled by the China Development Bank (CDB), China Exim Bank and Sinosure, which arrange financing, obtain export credit insurance and bring in Chinese service providers. The banks practice tied lending, making the loans conditional to the use of Chinese contractors to build the infrastructures. The Chinese government thus indirectly supports the internationalisation of its companies by guaranteeing them contracts with the countries assisted. In some cases, e.g. the loans to Angola in the 2000s, raw materials (such as oil fields) or infrastructure have been used as collateral.

The BRI is also a way for China to increase its circle of friends. Over a hundred countries are supporting the initiative. And China is reaping geopolitical advantages: only one country in Africa (Eswatini) still recognises Taiwan, though it used to have strong diplomatic ties on the continent. Most African countries are also implicitly aligned behind China in its trade war against the United States.

To secure its long-term hold on the African continent, China also set up in 2000 the Forum on China-Africa Cooperation (FOCAC). It has become, over the years, a real instrument for the implementation of the Sino-African roadmap, in terms of development, investment and "South-South dialogue", disconnected from the Western diplomatic orbit. At the last forum, held in Beijing in September 2018, aid amounting to $60 billion for Africa was announced. 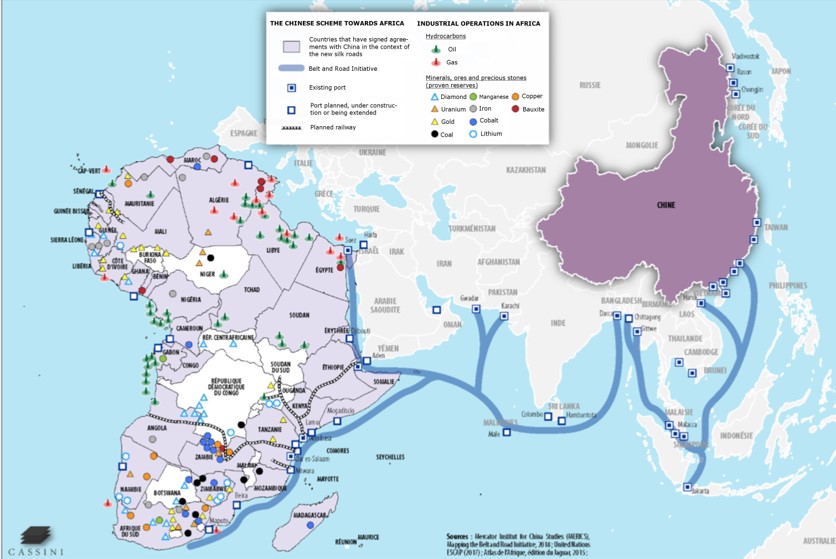