As part of the Enerdata China energy report we focus on the carbon trading pilot schemes currently implemented in China. Just under a year since China’s first emissions trading scheme launched in Shenzhen, Beijing is now looking to expand these schemes into more of the country’s key industrial regions, according to Su Wei, a senior climate official at the National Development and Reform Commission. Among the plans being considered is the possible linkage of the Beijing and Tianjin markets that was launched in November 2013, linking the manufacturing hubs of Jiangsu and Zhejiang to the Shanghai market and linking the Guangxi and Hainan regions to the Guangdong market in the south. Additionally, steel producing province Hebei could form part of a new emissions market linked to provinces of Inner Mongolia and Shanxi. 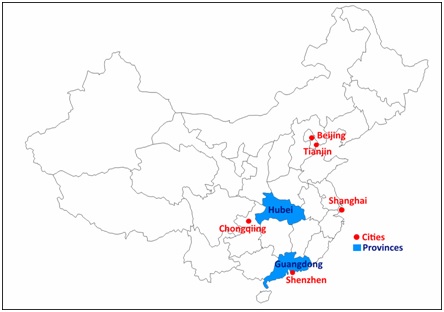 For a country that publicly rejects any absolute emissions reduction commitment, a position it reiterated at last December 2013 UN climate summit in Warsaw, China has somewhat ironically become one of the most active proponents of emissions trading over the past year with seven pilot trading schemes now in operation, and an eighth scheme launching later this year, with the government also confirming last July that it has agreed the design of a carbon tax scheme and is waiting for the opportune time to launch the scheme. The value of China’s pilot emissions schemes is in their diversity. Shenzhen, the first scheme launched in June 2013, has adopted an emissions intensity reduction scheme with quotas reviewed and adjusted annually to reflect the emission-economic relationship. This scheme reflects Beijing’s current preference for medium and long-term emissions intensity reduction targets and has seen appreciable price volatility with carbon trading at 28 Yuan/ton at launch before peaking at almost 144 Yuan/ton in October and then falling back to around 70 Yuan/ton in March with a current price range of 70-80 Yuan/ton. Beijing’s scheme saw opening carbon prices of 50-52 Yuan with free allowances equivalent to 98% of 2010 emissions that will be reduced to an allocation of 94% this year. But it is Guangdong, the fourth scheme to being launched in December 2013, which has attracted the most interest with the city seen as a national barometer as it accounts for around 25% of China’s emissions. Guangdong was the first scheme to implement a minimum auction price with 95% of 2010 allowances provided free and the remainder auctioned. The city set the minimum price at 60 Yuan/ton and met considerable resistance from most of the 242 companies covered. Hubei, the latest scheme launched in April 2014, is also worthy of a mention as the scheme prohibits the banking of unused allowances and allows credits from carbon offset projects in the province to be used for 10% of the compliance target. At face value the development of emissions trading schemes appears impressive for a country that has largely shunned free market economics and has a heavily regulated electricity sector. But as with most developments in China there is no certainty how the country will progress with its carbon and emissions initiatives. When announcing a taxation scheme had been designed the State Council suggested its introduction was contingent on inflation falling during the current 12th Five Year Plan (FYP), and with annual inflation falling from 5.4% in 2011 (the first year of the 12th FYP) to 2.7% in 2013 the criterion for the tax’s introduction appears to have been met. But few believe the taxation scheme will be introduced during the next FYP with the popular consensus among analysts pointing to 2018-19 as the most likely date. And it seems the planned scheme may also lack universal support within the government amid concerns from some lawmakers that a carbon tax may undermine China’s greenhouse gas emissions reduction, with reducing local air pollution seen as the country’s environmental priority. Similarly, China’s transition from a series of pilot emissions schemes to a national trading scheme is not set in stone; the government plans to review the pilot schemes at the end of 2015. And there is some doubt whether a nationwide scheme would be more efficient than a regional scheme with the old coal-fired domestic industry in the northeast, i.e. Beijing, likely to be short of allowances with carbon costs higher than the more modern and efficient, largely foreign investment, southeast economy around Guangdong. Although the minimum auction price in the Guangdong pilot scheme may provide an indication as to how China could develop an efficient and economically fair national market by varying the minimum auction prices across the country to reflect differing carbon intensities. There is of course considerable logic behind any delay in national emissions trading and carbon taxation until the end of this decade. With the UN climate process aiming to agree a new global climate deal to succeed the Kyoto Protocol at the Paris summit in December 2015, with the aim of the new deal to be operational January 2020, it makes little sense for Beijing to commit to new national emissions targets and carbon taxation levels until a new global climate deal has been agreed. Indeed it is conceivable that the timing of the pilot trading schemes, and confirmation that a carbon taxation scheme has been designed, are aimed at maximizing China’s political clout at next year’s Paris summit. But to empower its Paris negotiating position China first has to prove its own emissions reduction integrity, and key to this are the pilot trading schemes, both operational and planned. And the early signs are looking positive.