View all macro and energy indicators in the Ecuador energy report

View the detailed fondamentals of the market at country level (graphs, tables, analysis) in the Ecuador energy report

Oil production has remained stable since 2017, after a slight decrease over 2014-2017 (28 Mt in 2019). It increased by 3%/year between 2009 and 2014, following the inauguration of the Panacocha field. Production comes from the east of the country, with the most productive fields being Shushufindi, Sacha, Auca, ITT, Libertador, and Lago Agrio.

Crude oil production started at Tiputini in the Yasuni national park in the Amazon region in 2016. The ITT field (Ishpingo, Tambococha, Tiputini) reached an average production of 72 000 kb/d in 2019 and resources are estimated at 1 640 mbl.

The National Plan for Good Living 2017-2021 establishes the target of reaching 90% of electricity generation from renewables (including hydropower) in 2021 (76% reached in 2019).

From 2000 to 2016, to encourage the development of renewables, Conelec (the previous regulator) implemented Feed-in Tariffs (FiTs). The FiTs evolved over time in terms of duration, rates and technologies included. During the multiple revisions, the number of technologies included was reduced and, in 2014-2016, the FiTs were available for only biomass and small hydropower plants.

In its revised NDC (March 2019), Ecuador aims to reduce its GHG emissions by 20.9% from BAU levels in 2025. This reduction target could be raised to 32.8%, provided the availability of international support. 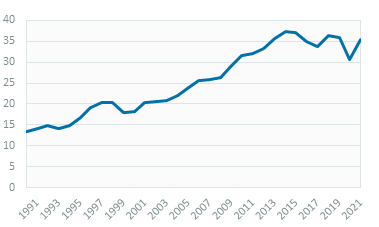