EU ETS: Last call before the doors close on the negotiations for the post-2020 reform

I4CE, IFPEN and Enerdata published a policy brief on the reform of the EU ETS for the post-2020 period.

Produced within the framework of the research program COPEC II and provides a synthesis of key results from a report that will be published later in October 2017.

Twelve years after the EU ETS was introduced as the cornerstone of EU climate policy to promote reductions of greenhouse gas (GHG) emissions in a cost-effective way, continued depressed prices are questioning its credibility.

A window of opportunity to reform the EU ETS is currently open but closing soon: the EU ETS directive is currently being revised for its Phase IV (2021-2030). Following a proposal for a revised directive by the European Commission in July 2015, trilogue negotiations between EU institutions started on April 4, 2017, with a focus in the negotiations on the strengthening of the EU ETS and on carbon leakage.

Given the divergence of opinion on a number of elements, there is still uncertainty on the possible outcome of the trilogue negotiations, probably to be reached in autumn 2017.

This reform is the last chance for the EU ETS: with another decade of depressed prices, the EU ETS would lose what is left of its credibility and would be replaced with fragmented national policies.

Following the adoption by the EU Parliament and the EU Council of their respective positions on the post- 2020 EU ETS reform proposal in February 2017, I4CE, Enerdata and IFPEN provide a new qualitative and quantitative assessment of these positions. Two other possible evolutions of the EU ETS during its Phase IV (2021-2030) are also analysed: the implementation of carbon price corridor on the EU ETS and an exit of the UK from the EU ETS. The analysis considers the EU ETS with a long-term perspective until 2040 (Figure 1), considering the implementation of other pieces of the EU Climate and Energy package. This policy brief provides a synthesis of key results from a report that will be published later in October 2017. 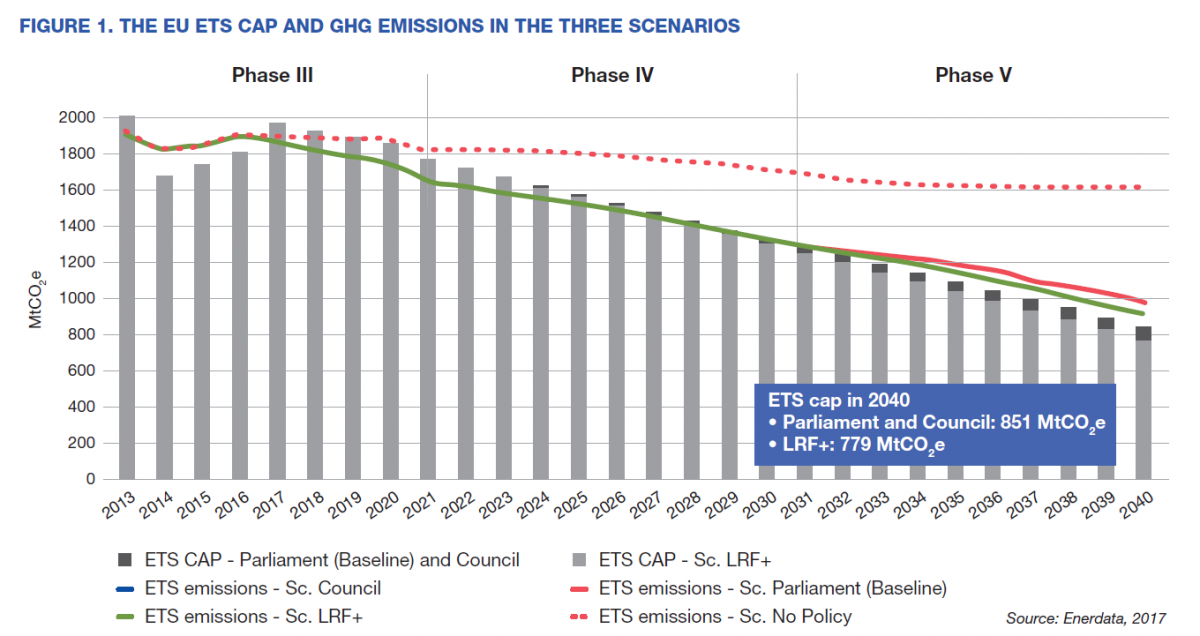