Uranium is the only resource presently used for nuclear power generation. However it has been known since the very early days of nuclear power technology development that thorium could also be used. In this executive brief, Enerdata discusses the advantages of thorium for future nuclear technologies in terms of safety and radioactive waste management, but also the hurdles that have prevented the development of thorium based reactors so far.

The tale of two fertile elements

Uranium is the only chemical element present on Earth that has a fissile isotope (235U). When irradiated by neutrons from the 235U fission chain reaction, the main 238U isotope (99.28%) yields 239Pu. Just as 235U, 239Pu which is not found on Earth is a fissile nuclide; it has a high probability to undergo thermal neutron induced fission and sustain an energy producing chain reaction. This explains why uranium is the only fuel that has been used in nuclear power reactors, so far. However there exists another element, thorium which like uranium can produce an artificial fissile nuclide (233U) when capturing a neutron. But unlike natural uranium, thorium has no fissile isotope; it is made of a single fertile isotope (232Th). Thus it is possible to envision a nuclear technology based on the fertile-fissile 232Th - 233U combination, similar to the 238U - 239Pu one. As there is no fissile thorium isotope present on Earth (that is to say no thorium equivalent of 235U) it is impossible to start a cycle with thorium alone; it is necessary to first produce 233U by irradiating thorium in uranium based reactors. Historically the thorium cycle could not have been developed before the uranium cycle! In such a fertile-fissile chain reaction the amount of fissile elements produced should at least be equal to the amount used for the production of energy and neutrons. Indeed 232Th - 233U nuclear cycle can be designed to operate in a breeding mode.

Is there any future for thorium based energy production?

Despite severe impediments that have limited the enthusiasm from industry, strong merits plead for developing thorium nuclear reactors. The main assets are the following: 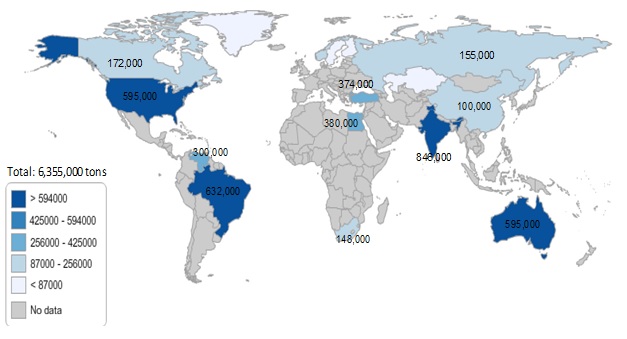 Thorium is three times more abundant in Earth’s crust than uranium. There are no detailed data on available resources as for there are for uranium. However the Red Book of OECD Nuclear Energy Agency & the International Atomic Energy Agency (OECD NEA & IAEA) reports an estimated world total of 6.3 Mt thorium resources recoverable at a cost of about US$80/kg, which is comparable to that of present uranium resource. (See Figure 1). It is worth noting that a precise estimate of available thorium resources is not critical as thorium can be used in a breeding mode operation only. In breeding conditions the known resources of either thorium or uranium are large enough to provide nuclear fuel for several thousand years, beyond any technology breakthrough timescale.

Nuclear properties of the fissile element 233U allow one to envision a 232Th - 233U breeding cycle over a broad neutron energy spectrum from thermal to fast. At variance, the 238U - 239Pu breeding cycle requires fast neutrons (no moderator).

The 232Th - 233U reactor could be operated with a liquid fuel instead of a solid fuel. The liquid fuel would incorporate thorium and uranium fluorides in a salt mixture that also serves as heat transfer fluid. The fluid flows through the core region and then through a chemical process unit to separate fission products and actinides, the latter being fed into the fuel circuit.

This Executive Brief is taken from a 6-page long analysis. To receive freely the whole analysis please contact us at research@enerdata.net.