Natural gas has been dominating Thailand’s power mix for about three decades. While indigenous gas production in forecasted to deplete in the 2020’s decade, Thailand is relying more and more on gas imports, with a particular increase in LNG imports. Although natural gas offers a better carbon footprint than other fossil fuels, its cost has been rising as a consequence of the increasing share of LNG in the gas imports causing electricity prices rise.

Enerdata is looking at the socio-political developments that Thailand is currently witnessing and its effect on its energy industry. From the Enerdata Key Energy News of last month the subscriber will have read that Ratchaburi Electricity Generating Holding Plc (Ratch), Thailand’s largest private power producer, announced plans to increase its capacity by 38% by 2023, from 6,000 MW to 9,700 MW, but added that nearly all the new capacity is expected to be generated from its foreign plants, given the lack of new investment opportunities for large power projects in Thailand. Ratch announced that a third of this new capacity will be installed in Myanmar, where there is a high potential for new fossil fuel and hydropower plants development, and there are growing concerns that the improving economic and political climate in Myanmar will prove to be more attractive to investors than Thailand. In recent months Thailand has drawn growing complaints from investors about rising electricity costs and poor reliability that is being caused by too much dependence on gas-fired generation, which has been dominating the power mix since the mid 1980’s, standing at around 70% of the country’s power generation since 2001. The lack of gas supply diversity, with Thailand reliant on supplies from Myanmar, Gulf of Thailand and the Malaysia-Thailand Joint Development Area, means that supply disruptions from once source can have a disproportionate impact on supply security. Gas supply from Myanmar was disrupted due to maintenance last April, the peak demand month, pushing the country close to brownouts, while a further disruption in December forced increased reliance on oil and lignite plants. 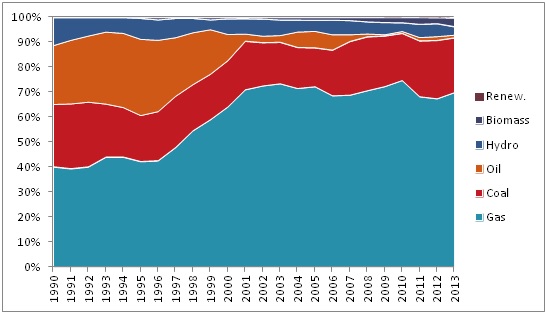 Of potentially more concern is that gas supplies from the Gulf of Thailand are expected to deplete by 2022, which will force increased reliance on LNG imports. According to the Federation of Thai Industries (FTI), increasing reliance on LNG will push up the electricity tariff by 50% by 2022, which will reduce industrial competitiveness and undermine economic growth. According to FTI, Thai investment attractiveness will be reduced if the electricity tariff increases above 5 baht/kWh (US$15c/kWh): with a current average tariff of 3.75 baht/kWh (US$11c/kWh), a 50% increase would push the tariff to over 5.5 baht/kWh (US$17c/kWh). The clear message from industry is that the government has to come up with an aggressive policy on energy diversification and support investment in new generation technologies. The previous government had made a commitment to reduce the share of gas-fired capacity in the Thailand’s power mix, but last month’s coup and the resulting political instability raises serious questions over medium and longer-term energy policy. While the ruling National Council for Peace and Order has said it wants to reduce the country’s dependence on imports and to empower the domestic market, and particularly the renewable energy sector, there is a concern it may adopt a more protectionist policy that will deter the much needed foreign investment in energy infrastructures that will be required to ensure the supply security, sustainability and affordability that it aspires to. Thailand has become increasingly dependent on electricity imports from Laos over the past five years with imports increasing by 81% between 2009 and 2013 to 12.5 TWh. Natural gas imports have increased by 21% over the same period with all the incremental volume provided by LNG, which accounted for 17% of total gas imports in 2013. It is evident that future gas demand growth will have to be met by increased gas imports, and particularly LNG, as domestic supplies progressively deplete. 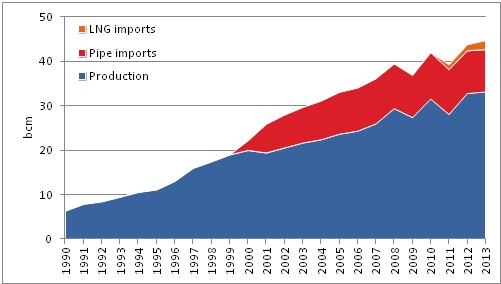 Previous proposals to build nuclear and new coal-fired capacity have been defeated by a fast-growing environmentalism movement in the country, which tends to question the effectiveness of current policy to reduce the country’s gas capacity share. While Thailand’s strong irradiation has made solar power a potential renewable resource, the low wind speeds in the country have undermined the development of wind power, which will remain uncompetitive until low speed turbine technology becomes more economical. This leaves biomass as the main renewable alternative to solar, but industry ineffectiveness and environmental concerns have limited the development of this sector. 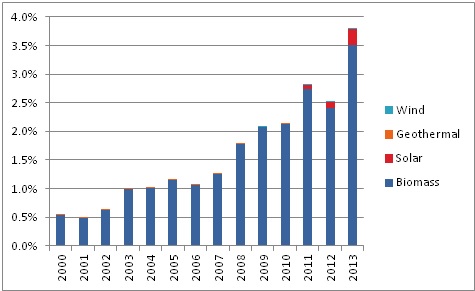 Thailand is essentially facing with a gas conundrum: it must reduce its carbon footprint and secure the base load supply it needs from new gas-fired capacity, but, with depleting indigenous gas reserves and a growing reliance on LNG imports, a gas-led policy could increase tariffs and undermine economic growth. Longer-term, renewable energy will be the solution, but in the medium-term Thailand has to make a choice between supply security and affordability; it cannot have both.