Until recently, the main point of discord in the climate debate surrounded the opposition of investing in fossil fuels as opposed to investing in renewable sources. Since the Fukushima accident in 2011, the discussion has shifted towards the merit of investing in nuclear against investing in renewables, with the potential side effects of nuclear technologies overshadowing the potential externalities of carbon emissions in the public debate. However, given the present and projected future technology costs, is such a divide well-founded when considering long-term climate goals?

According to the European Commission’s latest policy, the European Union is aiming at reducing its greenhouse gas emissions by 80% compared to its 1990 levels by 2050. The goal of this policy is to limit the long-term increase in the average world temperatures to 2°C compared to pre-industrial levels. The power sector is perceived to be the easiest and least costly way to decarbonise as it offers several options: low-carbon power sources such as nuclear and renewables and technologies preventing emissions, i.e. carbon capture and storage (CCS).

Strong efforts are needed to reach the 2050 target

With more flexibility in its use, electricity is set to gain a greater share of the final energy demand mix. Additionally, the power sector has followed a trend of decreasing its carbon intensity per unit of GDP in the past, and it is expected this trend should continue in the future, as shown below by the baseline. However, in order to reach the 2050 target, an effort even more intense would be necessary, breaking new ground compared to the historical trend. 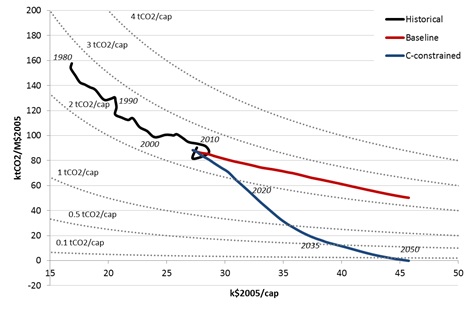