Evolution of households energy consumption patterns across the EU

16 Dec 2021
Why is energy efficiency households slowing down in Europe?

At the EU level, buildings account for 43% of final consumption. Residential buildings account for two thirds of this consumption and are associated with a high untapped energy savings potential. They therefore represent a major challenge for achieving the EU's climate and environmental objectives. For this reason, the EU has developed a comprehensive regulatory framework based on energy efficiency measures targeting buildings (EPBD, EED, Renovation Wave Strategy).

While the consumption of residential buildings has decreased overall over the period 2000-2019 (sometimes with large inter annual variations due to climatic variability, see Figure 1), this decrease cannot be entirely attributed to energy efficiency improvements. Other effects come into play, such as the evolution of the built surface, energy prices, occupant behaviours, occupancy rates, etc. Based on the methodology developed in the European Odyssee-Mure project, which allows to distinguish between several effects, we have highlighted a slowdown in energy efficiency progress in the residential sector at EU level since 2014. Let’s investigate the possible causes of this slowdown.

Figure 1: Final energy consumption of residential buildings in the EU

Trends of energy consumption of dwellings 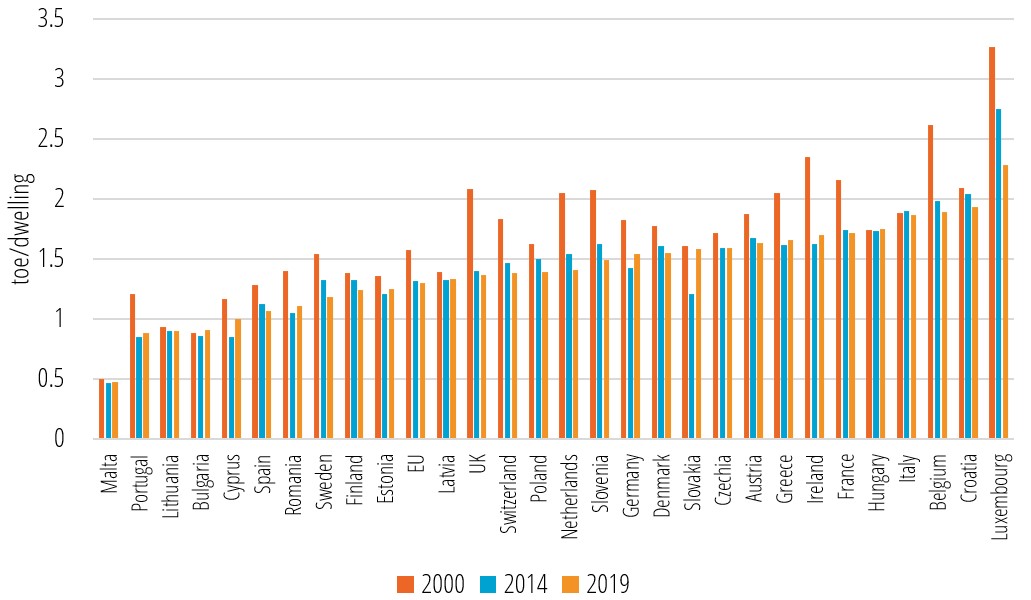 For the period 2014-2019, the trends are more contrasted between countries, with mainly 3 types of evolution (Figure 2):

The four dominant end-uses, which represent in total 98% of the dwelling consumption, are, by order of magnitude, space heating (65% in 2019), water heating (14% in 2019), appliances (13%) and cooking (6% in 2019) (Figure 3). Lighting and air-conditioning each account for less than 1%. Interestingly, in 2019, the share of energy consumption of appliances has almost exceeded that of water heating.

Figure 3: Household energy consumption by end-use in the EU 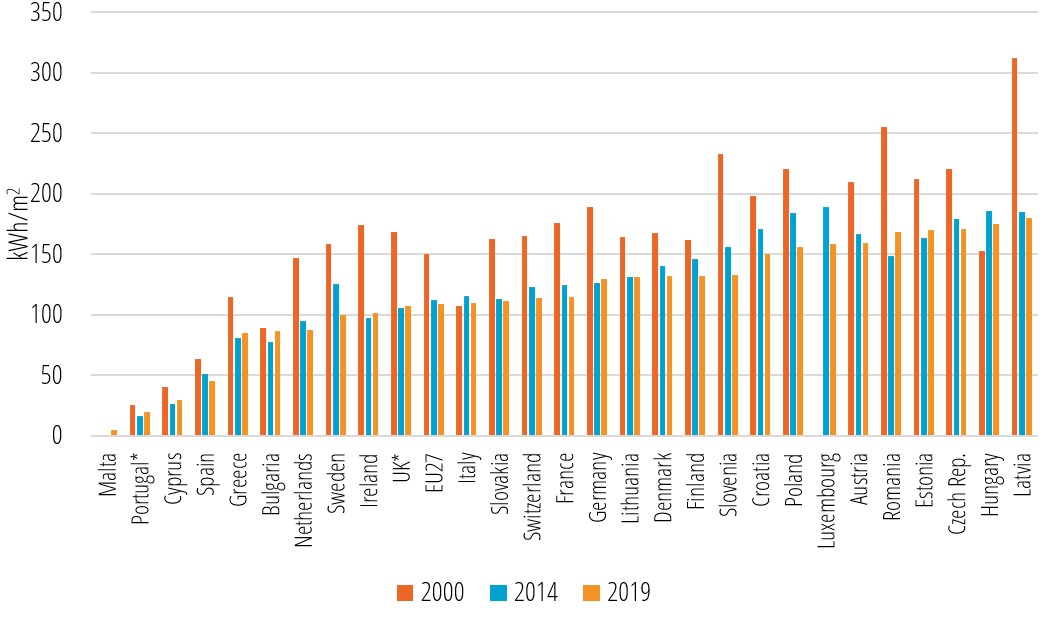 The trends by country for heating consumption per m2 of dwellings (Figure 5) mostly correspond to those observed for household energy consumption (Figure 4).

How is measured energy efficiency progress of households in Odyssee?

In Odyssee, an overall energy efficiency index, called "ODEX", aggregates the specific consumption trends by end-use to measure overall energy efficiency progress at sectoral level. Specifically, ODEX1 is calculated by weighting the index of each end-use by the share of the end-use in the sector's energy consumption. The households ODEX is currently calculated on the basis of 11 household end-uses or appliances2.

The advantage of this approach is to aggregate specific consumption trends initially expressed in different physical units (e.g., toe/m2 for heating, toe/household for water heating and cooking, kWh/household for lighting, kWh/appliance for appliances and cooling) to get as close as possible to the energy efficiency of each technology, through (dimensionless) variation indices.

Figure 6: Trends in household energy efficiency at EU level, according to ODEX

How can we explain energy efficiency and energy consumption trends after 2014?

Figure 7 illustrates the impact of the main drivers of household energy consumption. Between 2000 and 2019, the household consumption has decreased by 8.5 Mtoe. Increases in housing stock and more consuming lifestyles (more appliances and larger homes) have contributed to an increase in consumption of 72.5 Mtoe. Energy savings have more than offset this increase by reducing consumption by 86.5 Mtoe. The warmer climate in 2019 further reduced consumption by 2 Mtoe. 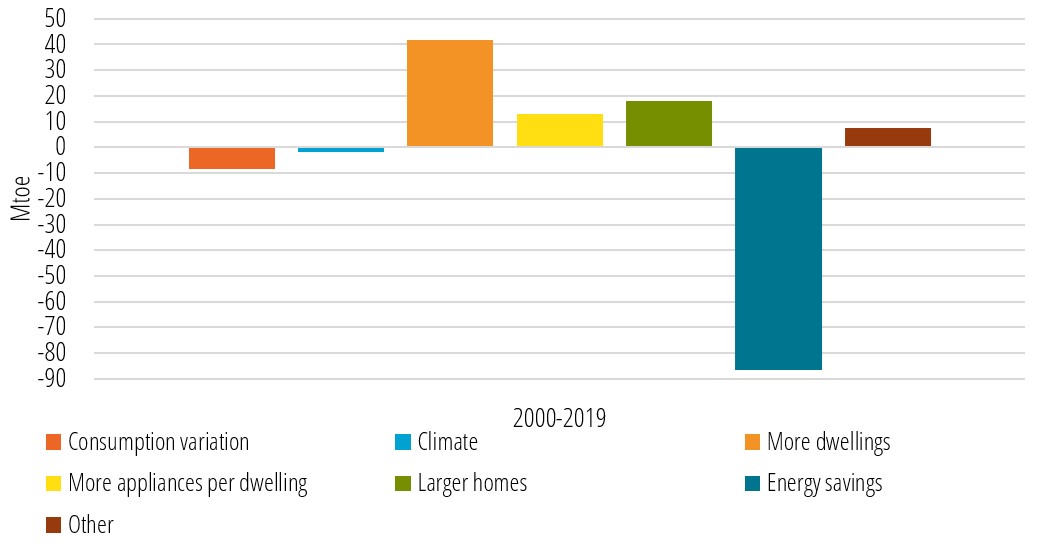 A further analysis of the decomposition of effects can be done by looking at the average annual effects (climate corrected for heating) for each period (Figure 8). The household energy consumption (climate corrected) decreases of about 0.7 Mtoe/year for 2000-2014 and increased of about 0.7 Mtoe/year after. These trends can be explained by the combination of contrasting trends on each effect:

Figure 8: Trends of the drivers of household energy consumption at EU level for various periods 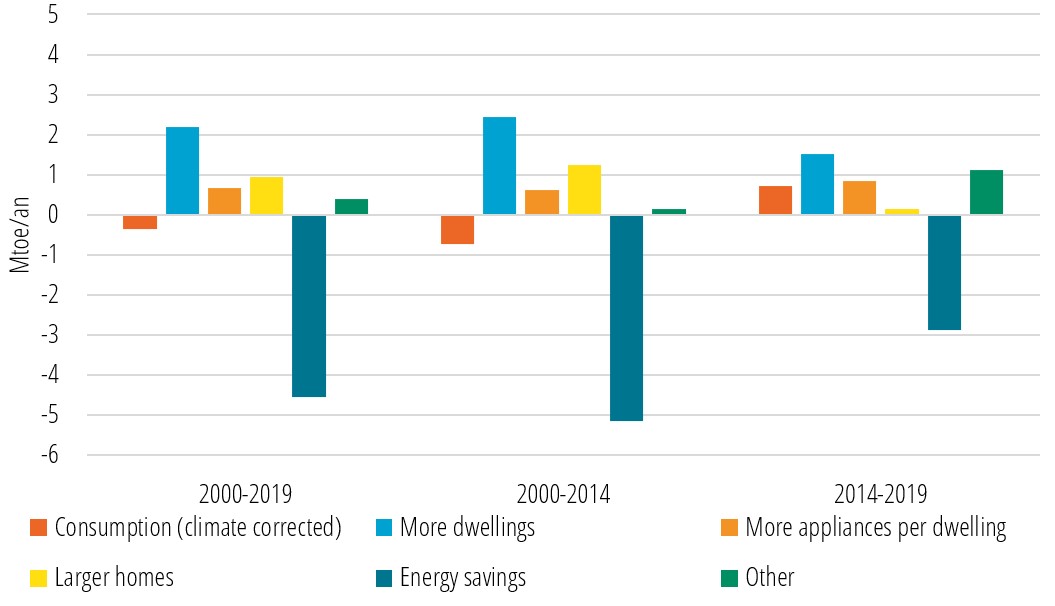 This work confirms the importance of monitoring and exploiting energy data at fine levels of detail in order to better understand the energy behaviour of household sector. However, despite the abundance of data available, and identified explanatory factors (decreasing share of new housing, retrofit practices, heating systems of energy poor households, rebound effect...) we note that it is still difficult to provide detailed explanations of the identified phenomena. Efforts still need to be made to collect technical and activity data, in particular on the quality and volume of renovations in each country, as well as data on the behaviour of households (use of technical and control systems; perception of comfort; influence of energy prices on behaviour, etc.)