Coal, the new war in the Pacific

Takeovers of oil and gas assets are multiplying on all continents, with coal assets participating as well, but with less exposure in Europe. Despite the construction of about ten coal-fired power plants in Germany and Poland, solid fuels appear as belonging to Europe''s past. The main competing grounds have moved from the near Atlantic to the distant Pacific. However, coal continues to consolidate its second rank in the global energy balance (28%) just behind oil (32%) and just in front of gas (22%), thanks to its current position as the largest source for electricity generation (40%) and its place as the go-to energy solution in emerging Asian economies.

Some of these Asian countries, which have exhausted their reserves, have become major importers (Japan, Korea, Taiwan). Others, still rich in resources, must substitute their domestic production shortfalls with imports, with this being the case in China and more so in India1. Countries like Indonesia, Vietnam, Thailand and the Philippines are right behind them as their reserves are used up. Indeed, all these countries fear being excluded from the development of the global and regional resources, that are spread over a vast area that stretches from Siberia and Mongolia to the Pacific rim (including unexplored territories in the southern tip of Africa) and houses current major exporters such as Australia, Indonesia, South Africa, Canada and Colombia. 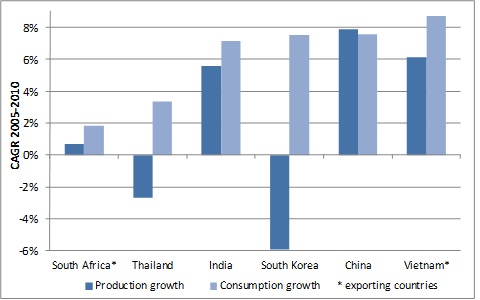 Competition is becoming increasingly fierce on these four continents. Japanese companies, like Mitsubishi, long committed in Australia alongside companies such as BHP-Billiton, do not seem to be the most aggressive. Things are different with Chinese firms; they are interested in auctions of new exploration areas or in acquiring assets from local companies in most countries with coal resources. Their offer is often accompanied by a proposal to build infrastructures, like railways, drainage mills or power plants designed to strengthen the host country''s electricity system. These Chinese firms, among which Shenhua is the most emblematic, find themselves most of the time in direct competition with Indian companies, which are strongly supported by their government, a government which remains concerned about the future of its electric and steel industries. The acquisition by Tata Power of Bumi Resources in Indonesia had opened a way in which many companies have rushed into to secure coal assets: this is the case of Australia, where Adani is installing an integrated chain of 20 Mt/year; in Mozambique, where Tata Steel partnered with Australian Riversdale to compete with Brazil''s Vale in order to exploit the large deposits of the basin of Tete; and in the same region of Africa, China is likely to meet India soon in Bostwana as the issue of transport routes for ore will need to be clarified. 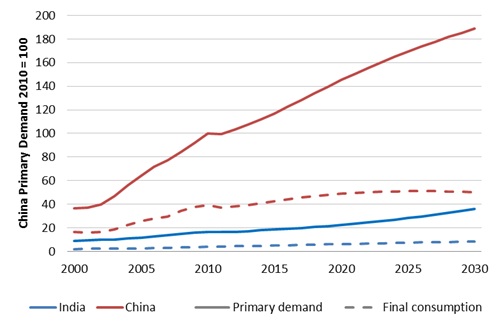 The consequences of this competition are significant for most Pacific countries. On the economic side, opening up new areas (greenfield projects, almost all of them open-pit mines) limits the upward trend in production costs for steam and coking coal. In addition, new port facilities promote trade intensification (the level of one billion tonnes is about to be reached) and competition, and increase the competitiveness of coal on the market for large boiler uses. On the environmental side, results are the opposite as the rising consumption of coal in countries with increasing energy demand tends to push CO2 emissions beyond the ceiling set by the IPCC in order to avoid serious climate change. In terms of geopolitics, the entrance of major Asian investors is often perceived as a cause for concern: in Australia, this mistrust towards Chinese firms appeared behind more or less disguised protectionist measures. In Canada, Chinese competition is more recent but already strong. In Mongolia, the China-Russia confrontation takes the form of rail projects, competing to transport coal production from the Gobi Desert, which hosts the huge deposit of Tavan Talgoi. In eastern Siberia, operation prospects around the Elga giant field sharpen the competition between China and Japan.

Will the United States and Western Europe remain mere spectators of this distant competition? This option is unlikely, since U.S. coal producers are already redirecting their exports to the Pacific zone through new port facilities on the West Coast. Indian companies are also considering the possible acquisition of coal mines in Central Europe.