Korea has not made any greenhouse gas emission commitments within the framework of the Kyoto Protocol. South Korea aims to reduce total greenhouse gas emissions by 4% by 2020 compared to their 2005 level (representing a 30% reduction compared to its baseline forecast in 2020). According to the plan adopted in 2007 by the authorities, CO2 emissions should be 3.2% lower in 2012 than in 2005.

The final part of the green action plan concerns the introduction of a carbon Emissions Trading Scheme (ETS), which was supposed to start tentatively in 2011 and be fully implemented the following year. Its introduction was first delayed until 2013, due to strong opposition from business groups. In 2012, the parliament approved a bill that calls for the introduction of the ETS from January 2015. South Korea becomes the third country in the Asia-Pacific region to cap CO2 emissions after Australia and New Zealand. South Korea's ETS is likely to cover 60% of the country's greenhouse gas emissions. It will impose a limit on greenhouse gas emissions to companies that discharge 125 000 tons or more of CO2 annually or workplaces that emit at least 25 000 tons a year. Penalty would be €67 per tonne. Korea Carbon Finance was created in 2008 and will manage the national carbon market. The company sells certificates linked to local CDM projects and invests in similar projects abroad. 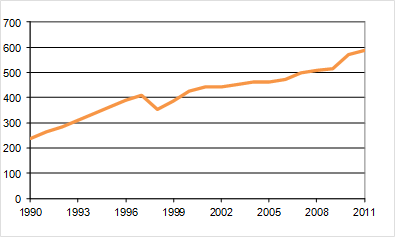