Significant investments in the development of renewables.

China is investing significantly in the development of renewables (284 GW of hydro, 100 GW of wind and 10 GW of solar by 2015), nuclear (over 25 nuclear reactors under construction), transmission (West-East electricity corridors ) and energy efficiency (16% decrease in energy intensity over 2011-2015). Efforts are being made to develop domestic oil & gas production and refining capacity (potentially 2 mb/d additional capacity by 2015). Gas imports are increasing with first gas from Turkmenistan in 2010 and the 4th LNG terminal in 2011, with increased volumes by 2015 (60 bcm/year from Central Asia and 30 Mt/year of LNG with 8 terminals being built or planned).

In 2010 the country created the National Energy Commission to better coordinate the various bodies involved in the energy sector. It will supervise the National Energy Administration (created in 2008) which reports directly to the National Commission for Development and Reform (NCDR), the organisation in charge of the formulation and implementation of medium and long term social and economic development plans. 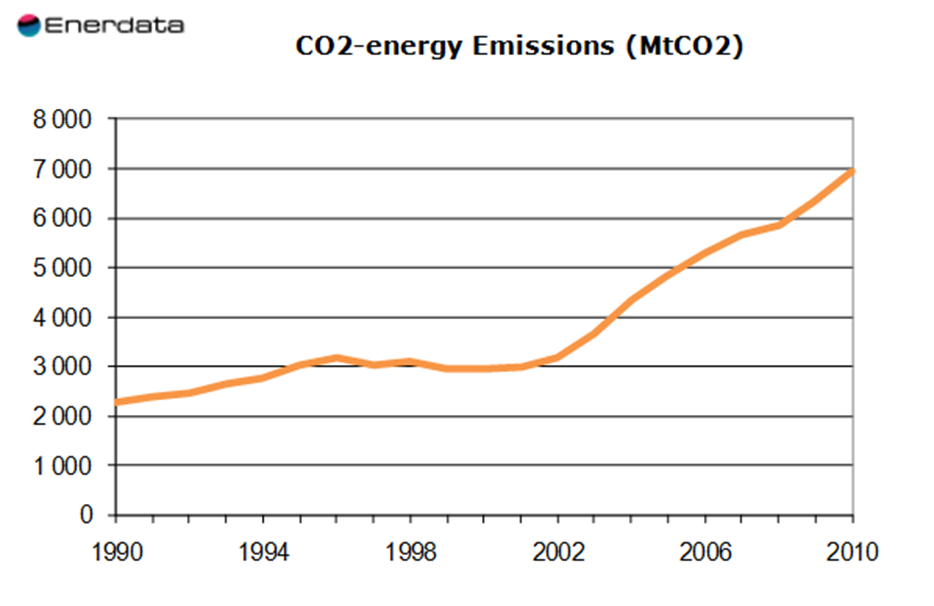 CO2 emissions from energy combustion have increased 2.4-fold since 2000. Compared to 1990, they have seen a 3.1-fold increase. During the 2009 Copenhagen Summit China announced its intention to implement policies aimed at reducing its greenhouse gas emissions, and set a carbon intensity reduction target of 40-45% by 2020. Accordingly, the 12th Five-Year Plan (2011-2015) aims at reducing carbon intensity of the overall economy by 17% (18% for industrial sectors).