The growth in global biofuel production has been slowing down since 2010 after a surge in the 2000s and posted its first decrease in 2020. Despite an expected rebound in 2021, the growth in global biofuel consumption could slow down very sharply by 2029, due to a drop in fuel demand, an increased competition between transport technologies and the decarbonisation trend of public policies, especially in the European Union.

This Executive Brief analyses the regional dynamics of the biofuels market, highlighting the main production and consumption zones, and the disruptions and risks to come.

UNDERSTANDING THE BASICS OF BIOFUELS

Biofuels are alternative fuels produced from biomass and used for transportation. There are two major biofuel sectors: bio-gasoline from sugar-based bioethanol and biodiesel from vegetable oils or fatty acid methyl esters (FAME).

Since 2008, European regulations (such as the RED II directive) distinguish conventional biofuels (first generation biofuels from agricultural raw materials that can threaten food security or have a negative impact on land use changes) and advanced biofuels (second and third generation, from non-edible vegetal resources and from micro-organisms such as algae or yeasts, respectively).

Biofuel consumption mainly depends on legal constraints on blending and on the fuel demand trends. They were mainly used in road transport in 2020, but new applications in the maritime and air sector are being developed.

ANALYSIS OF GLOBAL BALANCES UNTIL 2021

In 2020, global production fell for the first time in 20 years, as the biofuel sector was severely hit by the COVID-19 crisis and related lock-downs and border shutdowns that slashed fuel demand for all transport modes. The decline in global biofuel production was even more severe than that of fossil fuels.

In 2021, production should rebound (+13%), thanks to the expected recovery in oil demand and maintained or strengthened support policies for biomass-based fuels. However, traffic restrictions in the first quarter of 2021 should keep the 2021 production level below its 2019 level.

Since 2000, the share of biodiesel and hydro treated vegetable oils (HVOs) in total biofuel production has increased nearly 10-fold, from 3.3% in 2000 to nearly 32% in 2020, but bioethanol still accounts for 2/3 of total production.

In 2019, North America – particularly the United States – was the world's largest ethanol producer with 48% of global production and more than half of global exports. It was followed by Latin America (32%) – mainly Brazil – whose weight in world markets was more limited as a large part of its production is intended for domestic consumption. 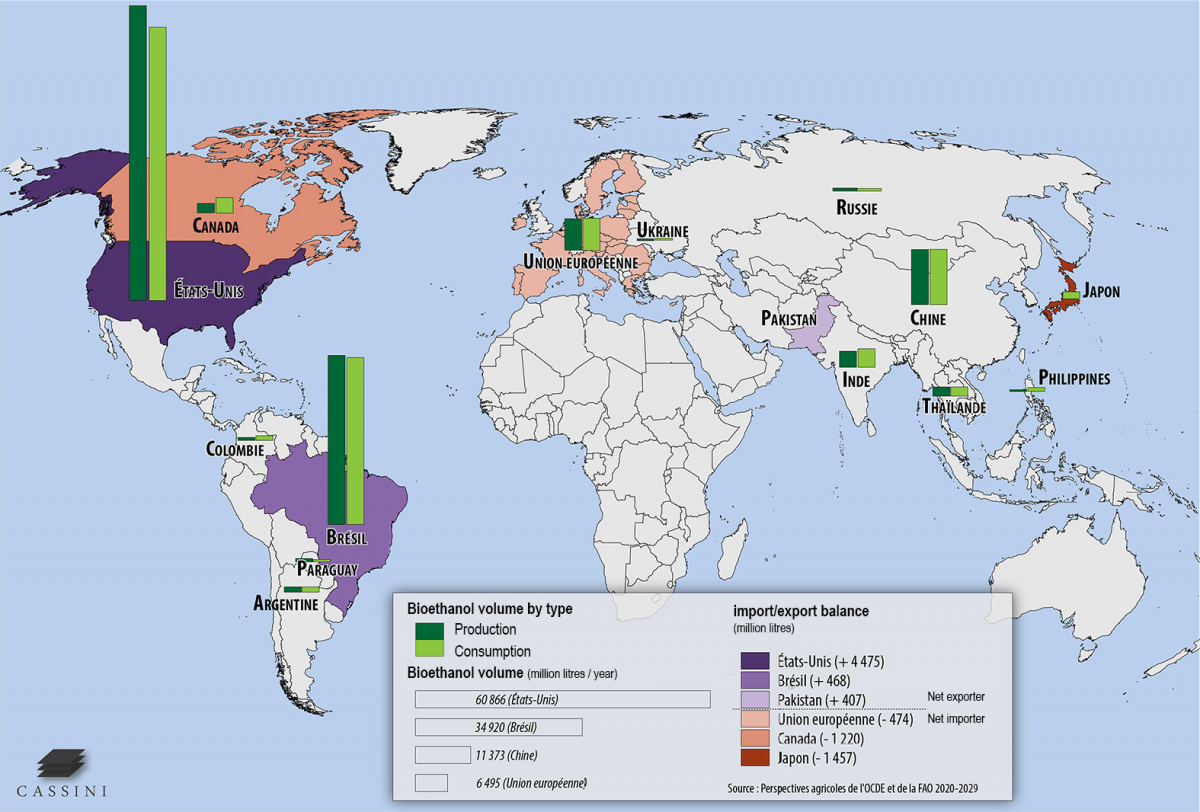 Overall, international trade in biofuels is relatively low in volume (except for intra-European trade). Exports represented less than 9% of global ethanol production and barely 14% for biodiesel over the period 2017-2019. The share of global biodiesel exports even declined between 2015 and 2019 compared to previous periods since 2000, as most of support measures are aimed at protecting national producers or consist in customs and trade barriers. 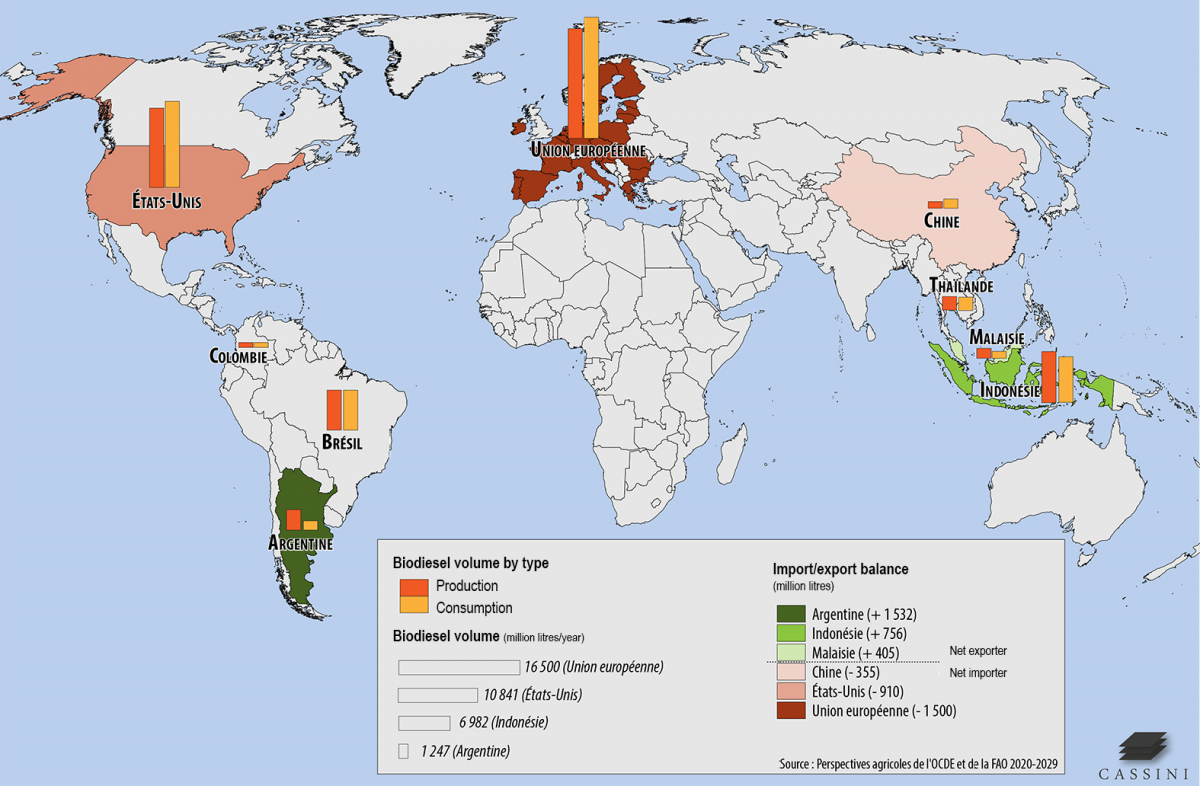 ANTICIPATED RUPTURES AND RISKS BY 2029

Global biofuel consumption could slow down very sharply by 2029, due to several factors, namely a drop in fuel demand, an increased competition between transport technologies and the decarbonisation trend of public policies. Support for public policies will remain one of the pillars of the development of biofuels. However, the EU and the United States are increasingly favouring alternatives to biofuels to decarbonise transports, betting on electric vehicles, hydrogen, and other low-carbon technologies. This should lead to an increased competition from electric mobility, hydrogen, and LNG, while the competitivity of fossil fuels could further dampen prospects for biofuels. Moreover, the COVID-19 crisis could mark a lasting decline in mobility, accelerating the decline in fuel demand due to the decline of thermal cars (especially diesel cars).

Overall, bio-ethanol consumption is expected to increase by 8.3% over the 2019-2029 period, while biodiesel consumption should decline by nearly 3% over this period. The slowdown in consumption should reduce the international trade, especially as the EU plans to stop importing palm oil-based biodiesel and as Indonesia should cut exports to meet its growing domestic demand. Unlike oil, biofuels are expected to remain a commodity produced and consumed locally.

First generation biofuels (mainly from corn, sugar cane and vegetable oils) will continue to dominate global production by 2030, and the share of advanced biofuels should not exceed 10% of world production. Only the EU will show a really high integration rate of advanced biofuels up to 31% of its production, far ahead of China (13%), Indonesia (12%), the United States (8%) or Brazil (6%), thanks to the REDII directive (2018), while Brazil will continue to bet on sugar cane to produce bioethanol.

A new global geography of biofuels

On the supply side, North America will remain the world's leading producer of ethanol, ahead of Latin America. Production will grow strongly in Asia to meet growing energy needs, whereas ethanol production in Europe will decline over the next 10 years, mainly due to the rise of electric vehicles. Europe will remain the largest biodiesel producer in the world, but its production will decline by 10% by 2029. Latin America will become the third largest biodiesel manufacturer in the world, overtaking North America.

Where ethanol export markets are concerned, the share of North America will decline sharply to the advantage of Latin America (moderate increase in its exports). Exports from Asian countries should decline slightly to meet rising domestic demand. Biodiesel exports from Europe will fall sharply due to the decline in regional production. Exports from Asia will decline by nearly 70% over the same period to meet to the rising consumption, to the advantage of Latin America, which will become the world's leading exporter with biodiesel exports doubling in absolute terms.

The biofuels' industry will be particularly vulnerable to threats posed by climate change (extreme events and water stress) to the stability of global agricultural supplies. Population growth and reduction in arable land could rekindle the risk of land use conflicts. Finally, debates could arouse over the impacts of biofuel production on forest and biodiversity and its use of synthetic phytosanitary products to maintain its productivity.

Focus on the EU: regulation changes and recovery plan

In the early 2000s, the EU started to promote biofuels, with the triple aim of cutting GHG emissions in transports, improving energy supply security and supporting agricultural production. In 2009, the use of biofuels for transports was supported by the Renewable Energy Directive (RED). Due to criticisms over the impacts of first-generation biofuels (from edible vegetal resources) over agricultural raw materials prices and indirect land use changes (ILUC, i.e., deforestation in Indonesia, Malaysia, and Brazil), a new directive – RED II - was adopted in 2018. It limits the share of first-generation biofuels in transport consumption (up to 7% in 2020) and aims to reduce the share of those with a high ILUC risk as of 2024 to reach 0% by 2030.

The future of the EU biofuel sector is now depending on the measures of the upcoming Green Deal and the Next Generation EU recovery plan, expected in 2021, which will set up the strategy to reach carbon neutrality targets and affect financial resources. However, biofuels remain absent from the EU’s latest strategic choices on transport decarbonation, as the European Commission is supporting the development of a European battery industry and of the European Alliance for Green Hydrogen.

This Executive Brief stems from an analysis by Enerdata, the French Institute for International and Strategic Affairs (IRIS) and Cassini for the French Ministry of Defence (full report available in French here).

The Observatory for the Security of Energy Flows and Materials is coordinated by IRIS, a leading French think tank on geopolitical and strategic issues, in consortium with Enerdata and Cassini, under a contract with the Directorate-General for International Relations and Strategy (DGRIS) of the French Ministry of the Armed Forces.

Through quarterly study reports, seminars and cartographic work, the main objective of this observatory is to analyse the energy strategies of three key players: China, the United States and Russia.