20 Jan 2021
Will the USA under Biden take the lead in the fight against global warming?

This paper written by the Enerdata Research Team analyses the evolution of the US energy policy under the Presidency of Donald Trump and the program of President-elect Joe Biden for the next four years.

As part of Donald Trump’s agenda that sent him to the White House in early 2017, the so-called America First Energy Plan aimed to attain energy independence by leveraging the country’s resources, especially fossil fuels. The core of Donald Trump’s energy policy was to expand domestic production of fossil fuels - oil, gas, and coal - and curtail regulations that were considered constraints on economic growth and job creation.

To reach this target, the Trump administration implemented several plans promoting energy development on federal lands, including oil and gas drilling in national parks and protected areas, and approving key infrastructure investments such as the Keystone XL Pipeline that encountered administrative hurdles during President Obama’s terms.

One of Donald Trump’s campaign promises was to revive the US coal industry by removing policies adopted by the previous administration. In 2019, the Environmental Protection Agency (EPA) replaced Obama’s Clean Power Plan, which aimed at reducing carbon emissions from power generation, with the Affordable Clean Energy rule that has no national emissions reduction objective, instead introducing guidelines to increase power plant efficiency.

Where climate is concerned, President Trump announced early on 2017 that the United States (US) would exit from the Paris Agreement under the United Nations Framework Convention on Climate Change (UNFCC). The US’s withdrawal officially took effect on 4 November 2020, while the US contribution to the Green Climate Fund had already fell from US$3bn committed by Obama’s administration to US$1bn in 2017 and even to none since 2019. Likewise, Donald Trump reversed numerous Obama era environmental rules and regulations, including several EPA's pollution-control policies, rolled back auto emissions standards to provide cheaper cars for consumers and even attacked the California-Quebec cap-and-trade carbon emissions scheme to impede its implementation.

Under the 2017-2020 Trump presidency, the US became the world’s largest oil producer, exceeding the crude production of both Saudi Arabia and Russia as of 2017. Oil production (crude and NGL) has increased by an average of 11%/year since 2016, reaching 746 Mt in 2019, with unconventional sources accounting for nearly 50% of the total output (Figure 1).

Figure 1: Crude oil and NGL production in the USA, Russia and Saudi Arabia since 2005 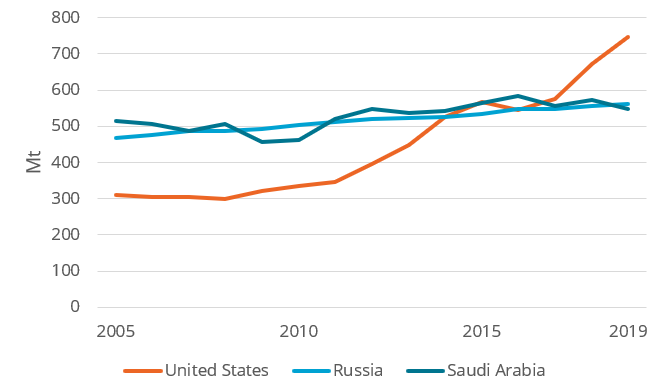 Similarly, natural gas production expanded by 5%/year on average since 2017, driven by shale gas, which surged from 60 bcm in 2007 to 717 bcm in 2019 (i.e. around 75% of total US production). In the coal sector, the administration’s policy only curbed the coal and lignite output decline that had been observed since the end of the 2000’s, driven by the fall in power sector demand (85 GW of capacity retired between end-2011 and end-2020, of which 40 GW retired since end-2016) (Figure 2). This trend slightly softened over the past four years, but not enough to prevent several large coal production companies from filing for bankruptcy such as Cloud Peak Energy, Murray Energy and Blackjewel (all in 2019).

Figure 2: New and retired power generation capacity in the United States since 2010 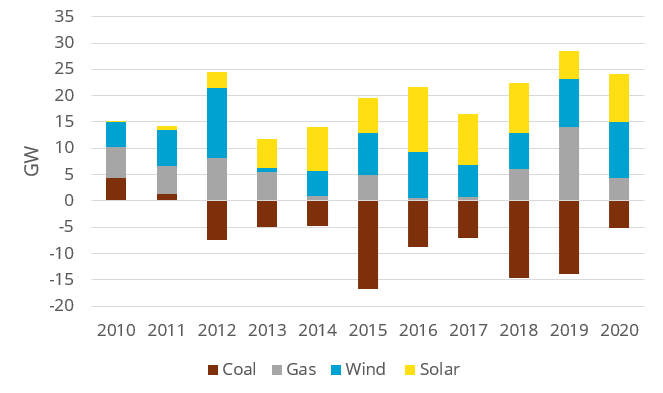 To summarise, the trend towards a clean power mix overcame resistance from the Trump administration. This was driven by the States and local authorities, who maintained the ambition of the Paris Agreement by deploying compliant policies, as well as by the involvement of utilities, who responded to pressure by NGOs and financial institutions to phase out coal and establish carbon neutrality plans.

Figure 3: Primary energy consumption per energy source in the USA in Mtoe (left) and shares (right)

Joe Biden: an ambitious plan to lead the fight against global warming

Contrary to Trump, Biden has argued in favour of developing the clean energy industry in the US and worldwide to address climate change. Biden’s “Plan for Climate Change and Environmental Justice” aims to reach 100% carbon-free power generation by 2035 and net-zero emission by 2050 in the USA. To achieve this, the president-elect has, among other things, pledged for the country to establish a new relationship with domestic fossil fuels, unveiled a 4-year US$2,000bn investment package, and developed climate policies based on international finance and diplomacy.

A new relationship with fossil fuels

During the campaign, Biden announced that “[he] would transition from the oil industry”, which constitutes a powerful turnaround in a country’s policy that has been deeply linked to the production and consumption of fossil fuels, domestically and overseas. To reach this goal, Biden has pledged to eliminate federal fossil fuel subsidies and to restore taxes on corporations that were excessively cut by the Trump administration.

The president-elect has said he will issue a series of new executive orders aiming at reinstating some environmental rules that the Trump administration rolled back. Indeed, the new administration is expected to stop awarding new fossil exploration on federal lands and waters - such as the Gulf of Mexico and Alaska, which will impact future oil and gas developments. To curb oil demand, Biden intends to strengthen fuel economy standards for new vehicles, promote the adoption of electric fleets vehicles by American consumers and support progress of advanced biofuels.

One of the main proposals of Biden is to establish a legally-binding “enforcement mechanism” to cut GHG emissions by 2025. This enforcement mechanism is to be based on the principle that polluters must bear the full cost of the carbon pollution they are emitting. However, the economic scheme that would put a price on carbon, as well as its scope, are yet to be clarified.

The second pillar of the Biden’s program consists of a massive investment plan to support the development of a low carbon industry and climate research and innovation in the USA.

To achieve this, the president-elect has unveiled a four-year US$2,000bn investment package, to fund clean energy technologies, including carbon-free power and grid infrastructure. The plan will support several new technologies such as grid-scale storage, green hydrogen, carbon capture and storage (CCS) as well as small modular nuclear reactors; the idea is to lower costs, enabling competitive exports. The plan also foresees speeding up the deployment of electric vehicles along with the required charging stations, as well as more stringent energy efficiency standards for buildings and for appliances.

Overall, the plan is mainly supply-oriented with large amounts of investments aiming to support the US industry and transform the country’s energy mix, but also to increase its trade exports. By significantly reducing the cost of low-carbon technologies made domestically, it is expected that the USA will make substantial increases in global shipments of such equipment. This would hasten the energy transition in partnering countries and open new markets for clean energy companies.

The new administration is also expected to use foreign policy to promote its climate agenda, by re-joining the Paris Agreement and encouraging multilateral finance institutions to promote climate goals. Indeed, Biden’s ambition is to take the helm in the battle against climate change and become the leading country in the clean energy industry. To achieve this, he wants to redirect financing provided by financial institutions such as the U.S. International Development Finance Corporation (DFC) and the Export-Import Bank (EXIM) from fossil fuels to clean energy technologies. This would allow private actors in developing countries to overcome investment barriers and would eventually unlock the capital investment required to achieve a global energy transition. By leveraging the country’s R&D and industry capabilities for export, while providing affordable financing (equity investment, loans and guarantees), M. Biden also aims to directly compete with China, which also offers both technologies and financing as part of its Belt & Road Initiative.

The first milestone: publishing an ambitious and credible NDC

On the race to give the US the leading role on the fight to climate change, the president elect has announced that it will make the US return to the Paris Agreement on its first day of his presidency. He also plans to cancel the Keystone XL pipeline permit that same day. Moreover, Biden committed the USA to fund the Green Climate Fund at the level of its pledge.. However, this will not be sufficient to create confidence with partners, whether they are countries or private organisations. Knowing that, Biden has sent a strong signal to the international community by choosing John Kerry, the former US Secretary of State, who negotiated the Paris Agreement and the nuclear deal with Iran under Obama, as “climate envoy”. However, the first milestone will probably be the National Determined Contribution (NDC) that the US will have to send as member of the Paris Agreement. The NDC sent to the UNFCCC by the Biden administration will have to demonstrate ambition and credibility in its goal to turn the country toward a climate-neutral economy by 2050. The world will scrutinise in detail the content of the upcoming NDC and decide whether the US could be considered as a key player to fight climate change.