Oil and biomass represent the bulk of consumption with 44% and 39%, respectively, but gas has been progressively gaining ground since 2009, reaching 13% in 2018. The remainder is supplied by hydro and solar electricity with 5%.

Jubilee moved from "promising find" to "mega-discovery" status when Tullow's Mahogany-1, -2 and -3 and Hyedua-2 wells extended the known size of the field. The field is likely to have more than 0.5 Gbl of recoverable resources, with ultimate upside potential upgraded to 1.8 Gbl and potentially more.

In its NDC (Nationally Determined Contribution), the country aims at achieving a 15% decrease in GHG emissions by 2030, compared to a BaU scenario corresponding to emissions of 74 MtCO2eq. The target could be increased to 45% if international support is available for financing, capacity building and technology transfer.

CO2 emissions from energy combustion are increasing rapidly; they have almost doubled over the past ten years. 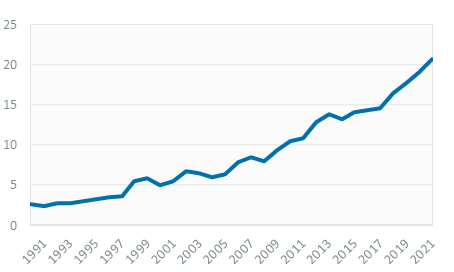