View all macro and energy indicators in the Cambodia energy report

Per capita energy consumption was 0.52 toe in 2018, including about 510 kWh of electricity. This is relatively low compared to neighbouring countries.

Biomass still dominates the energy mix (54% in 2018), although its contribution has been declining due to the increased use of coal and hydro. Oil ranks second (29% in 2018). Coal accounts for 11%, while primary electricity (hydro and imports) makes up the remainder.

View the detailed fondamentals of the market at country level (graphs, tables, analysis) in the Cambodia energy report

There is no production of crude oil as yet.

Of the six offshore blocks, only block A and C are currently assigned and carry out E&P activities.

There is no specific renewable energy (RE) target or dedicated policy, but the government refers to the National Strategic Plan on Green Growth 2013-2030 and the National Climate Change Strategic Plan 2014-2023 to guide its implementation of RE technologies.

Energy-related CO2 emissions nearly doubled over 2014-2017 with the commissioning of two new coal power plants and reached 11 MtCO2 in 2018. 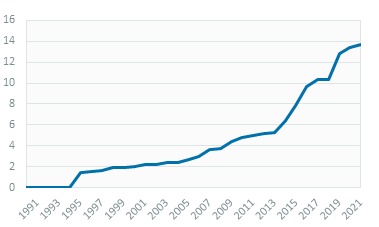