Solar surged in 2017, wind slowed down

With China and India investing in renewables to boost their power supply and meet their Paris Agreement commitments and technology costs steadily decreasing, global renewable capacity additions continued to gain momentum in 2017: nearly 47 GW of wind capacity and close to 73 GW of solar capacity were added worldwide during the year, bringing the respective cumulative capacities to 512 GW and 369 GW. 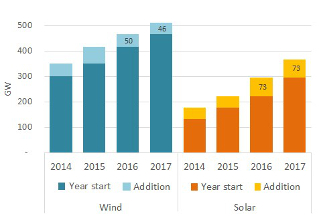 Figure 2: Wind and solar capacity additions by country since 2014 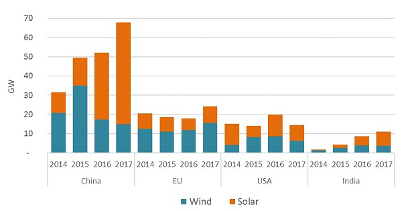 In 2017, nearly 73 GW of new solar capacity was added worldwide, thanks to a capacity boom in Asia: solar capacities rose by nearly 53 GW to reach 130 GW in China (+50% compared to 2016 additions) and by 7.5 GW to surpass 17 GW in India. Both countries have set ambitious solar targets (110 GW and 100 GW by 2022, respectively). Solar capacities also continued to build up in the United States with nearly 8.2 GW added in 2017 to reach 42.9 GW (11.3 GW added in 2016). Solar capacities surged in Europe in 2017, especially in Germany (+1.6 GW to nearly 43 GW), in France (+875 MW to 8 GW) and in the Netherlands (+610 MW to 2.4 GW).
Overall, renewables accounted for nearly half of capacity additions in the United States, for around 60% in China and 70% in India, requiring new investments in power grids and storage systems to offset intermittent generation. Despite these significant renewable additions, fossil power capacities continued to progress in 2017: 1/3 of the new capacities installed during the year in China were fossil (around 48 GW), while more than 10 GW of fossil capacities were added in the United States.