Asian and European gas prices will converge by 2030

Contrary to oil, gas markets are based on the availability of expensive transport infrastructure and have traditionally been regional (North America, Europe, and Far East Asia). If the development of LNG trade in the last decades has made the three regional gas markets more interconnected and more interdependent, we are still far from a liquid gas market such as the global oil market. In a scenario that achieves NDC objectives, Enerdata estimates that gas prices will rise through 2040 with a convergence of Asian and European market prices whereas North American market will keep its own price dynamics. More ambitious climate policies such as limiting the long-term increase of global temperature to 2 degrees would result in decreasing gas prices from around 2030.

Figure 1: Regional gas prices evolutions since 2000 and forecast through 2040 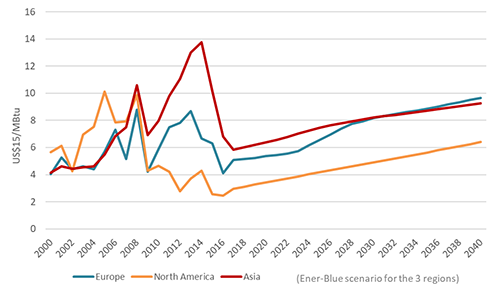 This analysis is based on EnerFuture’s energy projections up to 2040. In EnerFuture’s Ener-Blue scenario (see definition below), regional gas prices will increase through 2040. Gas importing markets – Europe and Asia – will experience regional prices converge, whereas the North American market will keep its own price dynamics, as its significant gas resources and limited LNG exports will not influence domestic prices.

Regional gas prices are also expected to increase until 2040 in the Ener-Brown scenario, unlike the projected decline by 2030 in the Ener-Green scenario.

In North America, gas market prices will remain much lower than in Asia or Europe

Traditionally, the North American gas market has had the cheapest price amongst the three major gas markets. This is due to a gas market that has long been liberalized, with competition stimulating high production levels from many producers in the United States, resulting in pricing based on gas-to-gas competition.

On the North American continent which is still mainly self-sufficient, the US – the world largest gas producer and world largest consumer – has been importing some amount of gas from Canada and exporting some (less) amounts to Mexico.

After several significant price spikes during the mid-2000s when the United States was believed to be running out of gas reserves, oil majors like ExxonMobil or Chevron started to build large LNG trains in Qatar to export LNG to the US, while some smaller independent companies experimented with producing shale gas. These latter players have since been so successful that shale gas in the US has become cheaper than US conventional gas production. Shale gas development has thus progressed very strongly over the last decade flooding the domestic market and thus depressing prices: US gas prices have remained broadly stable since 2009, while European and Japanese prices soared until 2012 before declining through 2016.

EnerFuture estimates that the current North American low-price environment will maintain with a slight recovery over time, as the US plan large scale LNG exports. However, the impact of LNG exports on domestic prices will remain muted for quite some time given the flat nature of the US shale gas production cost curve. In addition to LNG transportation costs, this explains the remaining gap between North American prices and Asian and European gas prices.

Figure 2: North America gas prices trends since 2000 and forecast through 2040 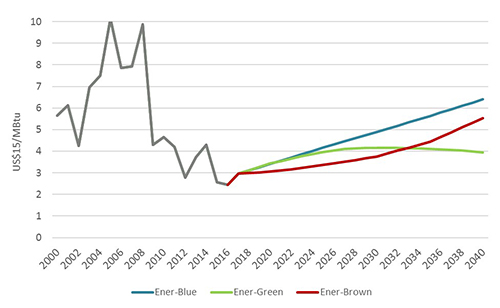 North America gas prices are expected to post a fast increase (+4.1%/year over the 2016-2040 period) in the Ener-Blue scenario but should remain much lower than European or Asian gas prices. The hike should be slightly lower (+3.5%/year) under the Ener-Brown scenario (large availability of gas production), while stricter climate policies under the Ener-Green scenario could curb the price growth as of 2030 (+3.9%/year between 2016 and 2030 and -0.5%/year afterwards).

Continental European gas markets, which have always been based on an oligopoly of suppliers, have historically preferred to use a proxy commodity on which to base gas price formation, namely oil indexation.

In contrast, the United Kingdom, which was self-sufficient until a decade ago and had many domestic producers, adopted a gas-to-gas price formation methodology. As gas production started to decline dramatically around mid-2000, the UK started to import pipeline gas from Norway, LNG from Qatar and elsewhere, and to connect their own markets with two interconnectors to the continent (IUK to Belgium and BBL to the Netherlands). These interconnectors laid the basis of a progressively used market-based, gas-to-gas pricing in continental Europe as well.

This trend was reinforced as of 2009, when European gas market prices declined, because of higher gas supply – in particular Qatari LNG, originally destined to the US markets but reoriented to Europe after the US shale gas revolution – and of collapsing demand (economic and financial crises, strengthened climate policies promoting renewables and relatively mild winters). This fall in gas market prices created an unsustainable mismatch between very low market prices in North Western Europe and the oil-indexed gas prices in continental gas markets (almost twice as high as market prices) between 2009 and 2016. Long-term suppliers were thus forced to progressively offer market-based gas prices, especially for quantities above their minimum contractual quantities. Oil-indexed gas prices finally fell in 2016, in the wake of the oil price collapse of 2015, and they have remained relatively low ever since.

European gas prices will then depend on the type of gas supply, which is currently dominated by pipeline gas from Russia and LNG imports.

- On the one side, there is Russia, which has invested massively over the last years in developing the Yamal region to replace falling production levels in the Nadym-Pur-Taz region and which is the only pipeline gas supplier disposing of important spare production capacities. Due to gas transportion issues – in particular across Ukraine – Russia is building the Turkish Stream pipeline project (two lines, one for Turkey and the other for Europe) and developing the North Stream 2 project (i.e. to double the existing two lines - against some European resistance).

- On the other side, there is LNG: new LNG export projects that were developed at very high costs when oil prices were high (up to 2014) and aimed primarily at the Asian gas markets, are now progressively entering an oversupplied gas market, which prolongs the low gas prices.

Figure 3: Europe gas prices trends since 2000 and forecast through 2040 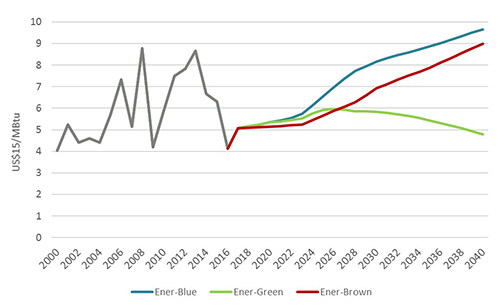 EnerFuture forecasts in all three scenarios that by around 2022-2025 the excess LNG supply will have been absorbed by thriving Asian markets and that the market will become tighter with prices increasing again. However, any price increase by Russia will be moderated to maintain market share as the wave of new US LNG supply reaches Europe. Overall, EnerFuture’s Ener-Blue forecasts gas prices in Europe to increase by an average 3.6%/year over the 2016-2040 period. Strengthened environment policies could cut European gas demand and prices as of 2026 (-1.6%/year until 2040 under the Ener-Green scenario). Conversely, weak climate policies would maintain gas demand and raise prices (+3.3%/year over the 2016-2040 period in the Ener-Brown scenario). In the Ener-Blue and Ener-Brown scenarios, these high growth rates would make European prices catch up with Asian levels as of 2028-2030.

With the recent oil price collapse and the simultaneous massive increase of new LNG supply - mainly from Australia - for the Asian market, Asian gas prices have also collapsed. As Asian markets progressively absorb the present (and still coming) gas glut, prices will increase again. Indeed, China wants to shift its coal-based development model to gas and renewables, which will also accelerate drying out of the global LNG glut.

Asian gas prices may start to move progressively towards gas-to-gas competition in the case of an important price mismatch between oil-indexed and market-based gas prices (renegotiation of oil-indexed LNG contracts to use a more diversified, Asian spot market-based pricing formula). EnerFuture doesn’t expect oil markets to boom during the next few years but sustained gas demand in Asia over the 2016-2040 period – along with the high “ability to pay” of Asian OECD importers – will raise gas prices in the region (+0.9%/year in the Ener-Brown scenario and +1.3%/year in the Ener-Blue scenario). Asian prices could decline by 2.9%/year between 2026 and 2040 in the case of stricter climate policies (Ener-Green scenario). 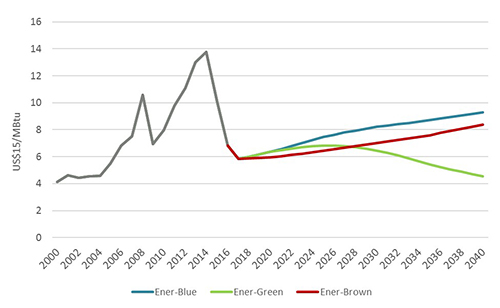 In the long run, gas prices are forecast to decline in all three regions in the Ener-Green scenario, whereas they would rise everywhere in the Ener-Blue and Ener-Green scenarios. Though following the same rising trend, the North American market is expected to maintain its low gas prices - they will not converge with Asian or European prices – due to the limited impact of exports on its gas supply. Importing markets – Europe and Asia – are expected to see their prices converge.

Most of world’s gas demand is neither oil-price indexed, nor market based, but simply regulated (and often thus strongly subsidized). This is the case in most developing countries.

Regulated prices are expected to converge to some market logic over time, as subsidized prices are not sustainable macroeconomically for the countries on the long run. This is true for importing countries, but this is increasingly true also for producing countries. Recent empirical evidence shows that most countries are indeed reducing energy subsidies.