Energy consumption is relatively low at 0.84 toe/capita (vs around 2 toe/capita in Thailand), including around 1160 kWh of electricity (2020). 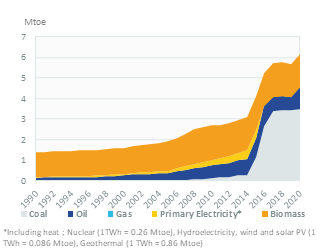 View the detailed fondamentals of the market at country level (graphs, tables, analysis) in the Lao PDR energy report

In 2007, the Government granted an exploration permit for the Savannakhet area, which is the main zone of interest in the country. Three permits had been granted in the past, but no drillings were carried out and the companies withdrew. Drilling has not started in the Champasak and Saravan PSC.

A small refinery of 20 kb/d was commissioned in 2020. Oil demand is entirely supplied by imports from China, Thailand, and Vietnam. In 2020, total oil product imports amounted to around 1.1 Mt, which is nearly twice the level in 2010.

In 2011, the government published its Renewable Energy Development Strategy, which focuses on small scale renewables (biofuels, biogas, solar energy, wind, small hydropower). The government aims to increase the share of renewables (excluding large hydro) to 30% of the total energy consumption by 2025 (ambition confirmed in the new PDP 2020-2030). The government targets 400 MW of small hydro, 33 MW of solar, 73 MW of wind, 58 MW of biomass and 51 MW of biogas capacity by 2025.

In its updated NDC (2021), the country pledged to unconditionally reduce its GHG emissions by 60% in 2030 compared to a BAU scenario. To achieve this goal, Lao PDR aims to reduce LULUCF emissions by 1.1 MtCO2eq/year by reducing deforestation, to install 7.5 GW of hydropower capacity (to reach 13 GW), and to introduce 50 000 energy-efficient cooking stoves.